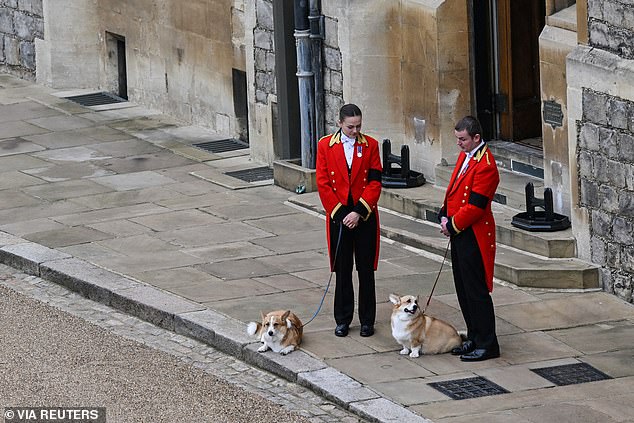 As they eagerly awaited Her Majesty’s coffin to arrive at Windsor Castle this afternoon, the Queen’s cherished corgis remained beside their devoted owner until the very end.

Before the late queen was put to rest next to her adored late husband Prince Philip, two attendants were spotted waiting in the quadrangle with Muick and Sandy, two Pembroke Welsh corgis.

The Queen was well known for her affection for corgis and owned more than 30 of them during the course of her 70-year reign.

The corgis, one on a red lead and the other on a blue lead, waited to say their farewell after the Queen’s burial ceremony at Westminster Abbey this morning as her casket travelled to the committal service at Windsor Castle.

Prince Andrew paid a visit to the two puppies as soon as he arrived at Windsor Castle in preparation for the ceremony in which his mother’s casket was lowered into St. George’s tomb.

The divorced couple, The Duke of York and Sarah Ferguson, have declared that they will take care of the Queen’s corgis at the Royal Lodge in Windsor.

Sandy and Muick were given to the Queen as a present when the previous Duke of Edinburgh passed away.

At the beginning of 2021, Muick pronounced Mick, and Fergus, a so-called “dorgi,” a hybrid between a corgi and a dachshund, joined the royal family.

The Loch Muick on the Balmoral Estate, where the Queen died away on September 8, inspired the name Muick. In the meanwhile, Fergus was given that name in honour of the Monarch’s uncle, who died in action during the First World War.

But Fergus passed away after just five months, and Sandy, a new corgi, took his place. Sandy was shown with Muick at the Windsor Castle Steps.

Sandy was a gift for Prince Andrew’s 95th birthday from his children, Princesses Beatrice and Eugenie.

For her 18th birthday, her late father King George VI gave the late Queen her first corgi, Susan. Then, Susan was descended from ten generations of her corgis.

Her dogs received the royal treatment, with their own chambers, raised wicker baskets, and chef-prepared dinners of beef, chicken, rabbit, liver, cabbage, and rice every night.

Sometimes the dog’s meals were prepared by the Queen herself. However, it was said that her late husband “hated” the barking of the dogs.

An animal behaviourist was reportedly sent in in 1989 to train the corgis to stop biting members of the Royal Family.

The Queen, however, required three stitches after being bitten on her left hand two years later as she attempted to break up a corgi battle.

On exhibit during today’s national day of sorrow weren’t simply corgis. For the last time at Windsor, the Queen’s Fell Pony, Carltonlima Emma, also came out to see the late queen.

As the Queen’s coffin travelled toward Windsor Castle, the black pony was seen standing by the side of the road.

She was escorted by Terry Pendry, the Queen’s last stud groom and manager, who bowed as the hearse passed him.