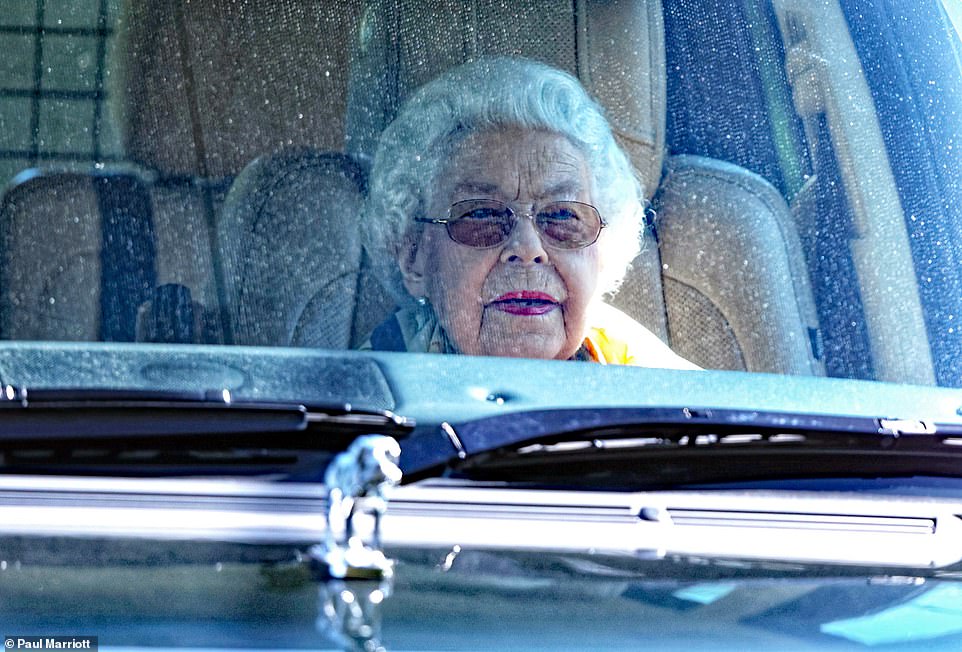 The Queen today donned pink lipstick and sunglasses as she went for a drive with her close friend and dresser Angela Kelly by her side as she turned 96 after Prince Harry’s veiled attack on those protecting the Monarch.

Despite her grandson’s incendiary comments appearing to question those around her – and him opening up to NBC about their ‘private’ time together – Her Majesty looked happy and relaxed as she chatted away to her bodyguard as he drove her through the grounds of Sandringham, which was also treasured by her late husband Prince Philip.

Wearing sunglasses, pink lipstick and a trademark headscarf, the royal is believed to have her dogs in the back of the Range Rover. In the past she would have driven them herself, but she has been suffering increasing mobility issues.

She is staying at Wood Farm – the farmhouse that the Duke of Edinburgh made his retirement home – where it is expected she will be visited by friends and family over the next few days.

Her friend and loyal confidante Angela Kelly arrived for a visit this morning. The 64-year-old, known as the Queen’s ‘gatekeeper’, has been given permission to re-publish her best-selling book about her 28-year career at Her Majesty’s side with a new chapter and photos detailing the last two difficult years including her part in the ‘HMS Bubble’ set up to protect the monarch at the height of the pandemic.

The Queen was seen for the first time since Prince Harry said his grandmother needs extra protection in comments that threaten to undermine her birthday and a row over security that could overshadow her historic Platinum Jubilee.

The Duke and Duchess of Cambridge dodged an awkward question about the Duke of Sussex’s claim he came to Britain last week to ensure the Queen is ‘protected’ on a royal visit this morning. Prince Charles is said to be at the end of his tether with his youngest son as palace staff who cared for Her Majesty throughout the pandemic accused the Duke of Sussex of ‘breathtaking arrogance’.

Her Majesty is celebrating her birthday with her typical lack of fuss today – and tributes have poured in from her family including William and Kate. To mark the occasion, a glorious photograph has been released of Her Majesty standing with two of her own favourite fell ponies, Bybeck Nightingale and Bybeck Katie.

The Duke and Duchess of Cambridge shared a picture of them with the Queen, and one with the monarch’s great-grandchildren, and said on Instagram: ‘Wishing Her Majesty The Queen a very happy 96th birthday today! An inspiration to so many across the UK, the Commonwealth and the world, it’s particularly special to be celebrating in this Platinum Jubilee year’.

Prince Charles shared a series of images of his smiling mother through her life – as well as with him and his wife Camilla – with the caption: ‘Wishing Her Majesty The Queen a particularly special 96th birthday today, as we celebrate her Platinum Jubilee year’.