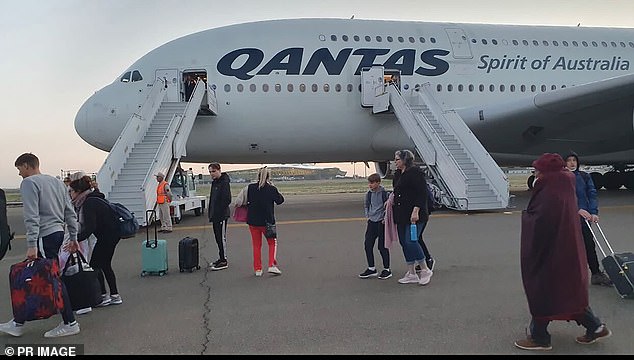 A Qantas flight that was forced to make an emergency landing in Azerbaijan has caused delays around the globe, and Australian families are unsure whether they will make it home for Christmas.

Friday, an A-380 aircraft in route from Singapore to London was forced to divert course to Heydar Aliyev International Airport in Baku.

An intermittent problem indicator in the cockpit prompted the pilots to make the last-second reroute.

The stranded passengers do not know if they would make it home in time, whilst tourists in London reported they were supposed to board the flight to Australia when it landed.

Now they have been informed that they likely won’t be able to depart until Christmas Day, throwing their holiday celebrations into disarray.

In a further setback, a different Qantas flight was canceled 10 minutes before its scheduled departure from Bali, causing additional passengers on the opposite side of the globe to be upset.

A Qantas flight that made an emergency landing in Azerbaijan has caused flight delays around the globe, and families are unsure whether they will be able to return home for Christmas.

The A-380 aircraft was en route from Singapore to London on Friday when it was forced to make an emergency landing at Heydar Aliyev International Airport in Baku.

Nik Long is one of the tourists stranded in Baku, and he stated that he was on the airplane set to depart at 10.30 p.m. on Saturday.

“The majority of us are still awaiting information on connecting flights,” he told the Sydney Morning Herald.

Therefore, Christmas may be spent flying or in immigration.

One passenger, who requested anonymity but was scheduled to board the jet after it landed in London, stated that they would miss Christmas celebrations.

“We were scheduled to go to Sydney tonight, December 23,” he stated. The intention was to return home for Christmas.

Now it appears that we may go on the 25th and return home on Christmas Day… It is really distressing for my family, and I am rather perplexed.’

A Qantas representative stated that the business dispatched a relief flight and dispatched engineers from London to Azerbaijan to repair the aircraft.

Passengers delayed in Baku reported that they had to wait seven hours before being escorted to a nearby hotel while the airline worked on planes to transport them.

According to one source, travelers were compelled to hand over their passports to Azerbaijani authorities in order to undergo the approval process.

Qantas has angered travelers in Bali by cancelling one of its flights mere minutes before passengers were scheduled to board.

Tourists were told they would be housed in hotels until another flight could be arranged for them.

An intermittent malfunction indicator in the cockpit prompted Qantas pilots to make a last-minute reroute and land in Baku (pictured, Heydar Aliyev Airport in Baku, Azerbaijani)

William Mansell, a passenger, stated that the flight had already been delayed due to inclement weather before it was canceled due to insufficient staff rest.

He stated that the airline had not sent an apology and that he was scheduled to return to Australia at 6 a.m. on Christmas morning.

According to a Qantas spokesperson, the flight was delayed owing to a variety of issues.

She stated, ‘One of our Sydney-bound planes was rerouted to Jakarta due to unanticipated bad weather in Bali on Friday’

“Due to crew rest needs, the flight to Bali was delayed till Saturday.” This also delayed the Bali to Sydney return flight.

Our employees are rerouting the passengers as quickly as possible, despite the fact that we’re aware of how inconvenient this is for them.

The airline also issued a statement following Friday’s emergency landing of the A-380 in Baku.

A representative stated that the aircraft periodically alerted the pilots of the possibility of smoke in the cargo hold.

Although it was believed to be a sensor malfunction, the aircraft diverted to Baku as a precautionary measure.

Initial inquiries have uncovered no sign of smoke in the cargo hold. We appreciate our clients’ patience and are striving to get them on their way as soon as possible.