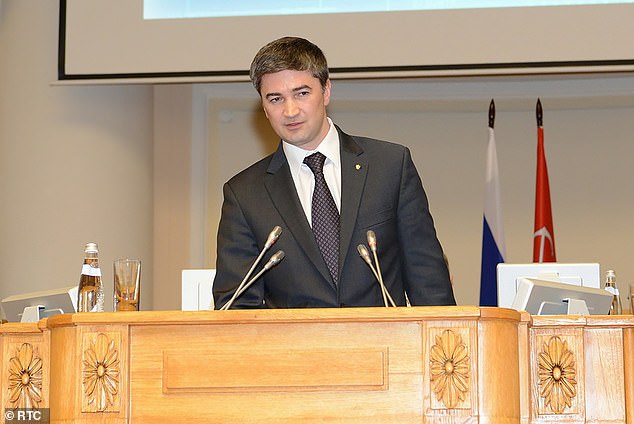 According to a story, Vladimir Putin’s “chief poisoner” has been sacked as head of the FSB’s secret chemical laboratories for criticizing the conflict in Ukraine.

Colonel-General Eduard Chernovoltsev, age 52, was in charge of NII-2 FSB, a research institute that creates lethal poisons used against Kremlin adversaries such as Alexei Navalny.

A source told the independent media outlet The Insider that the top intelligence chief formerly resided in Kyiv and was angry about the February conflict.

According to a source, he ‘really regretted the beginning of the military action in Ukraine and, in the company of his friends, stated more than once that it had all gone too far.’

Colonel-General Eduard Chernovoltsev, 52, has been sacked from his position as the chief of the FSB’s secret chemical laboratories for criticizing the Ukrainian conflict.

Predictably, the Kremlin saw these remarks as treachery to the totalitarian state and dismissed him from his position.

Reportedly, his team was personally involved in the poisoning of Navalny and another Putin opponent, Vladimir Kara-Murza, with the nerve chemical Novichok.

According to reports, a massive FSB operation was responsible for tailing and poisoning Navalny, which nearly caused to his death on a trip from Tomsk in Siberia to Moscow.

According to human rights organizations and Western governments, both individuals are presently being held as political prisoners in Russia.

Colonel-General Eduard Chernovoltsev, 52, was in charge of the NII-2 FSB until Vladimir Putin fired him (pictured today)

Chernovoltsev allegedly managed the NII-2 FSB, a covert laboratory where numerous poisons are developed (pictured: The FSB headquarters in Moscow)

The General was officially sent into retirement.

However, trustworthy sources told The Insider that the Kremlin blamed him for numerous database leaks that allowed journalists to publish their investigations, particularly those pertaining to Putin’s allies.

A source stated, “Two years ago, Eduard [Chernovoltsev] vowed to the country’s leadership that he would seal all leak lines.”

This was practically impossible, however, due to our system’s leakiness.

Chernovoltsev’s purported private qualms about Putin’s conflict, which has resulted in an estimated 100,000-plus Russian deaths, were reported by a separate source.

According Russian reports, a massive FSB operation was responsible for tailing and poisoning Navalny, which nearly resulted to his demise (pictured on a stretcher)

The FSB is one of Putin’s secret agencies that has been heavily criticized for inadequate intelligence, which led the Russian leader to believe his forces would be welcomed in early 2022 when they invaded.

According to the report, Chernovoltsev was twice apprehended by traffic police inspectors for driving under the influence.

When he had attained the level of FSB general for the second time, he was arrested.

According to the report, he refused to undergo a medical checkup and obtained assistance to avoid criminal punishment.

Officially, the FSB stated that he had reached retirement age, however documents indicate he is only 52, much below the FSB’s retirement age.

The only photograph of Chernovoltsev believed to exist dates to 2018.

Previously, a collage depicting his poisoning squad members was revealed.

In 2020, he was appointed to a committee on the digital growth of the country headed by the Russian prime minister Mikhail Mishustin.