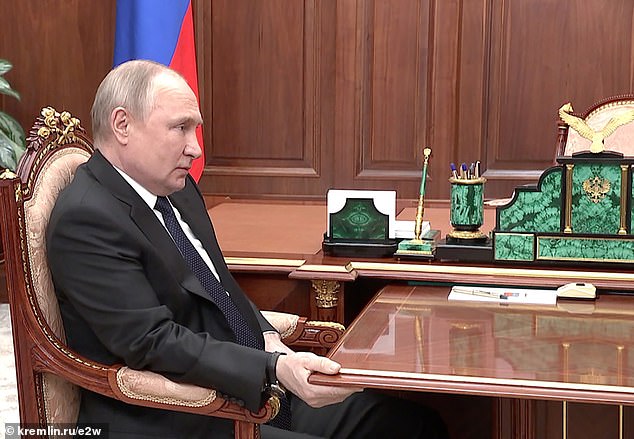 According to Danish intelligence, Vladimir Putin’s judgment may have been impaired since he was undergoing hormone therapy for cancer at the time of the invasion of Ukraine.

The Russian despot is apparently in chronic agony, according to an agent for the Danish Defense Intelligence Service FE known only as Joakim, which explains why he has been observed during the battle fiercely grasping tables and chairs for support.

Putin’s cancer diagnosis is not terminal, according to the person who oversees Denmark’s intelligence collecting on him, but his prescription medication may have caused him to have “delusions of grandeur.”

He explained to the German news organization Berlingske that the discomfort was continuous and had been bothering him for some time.

That explains why he frequently sits and grabs objects firmly. To make the discomfort go away.

The secret service also thinks the Russian president was given powerful medication to dull the pain, which may have been caused by a fall or a sports injury.

Throughout 2022, there were persistent rumors about Putin’s health, which were stoked by his public appearances, during which he frequently clung to objects for assistance and appeared ill at ease and unstable.

Putin allegedly once had cancer and was receiving treatment when the war first broke out, according to Danish spies at FE.

Delusions of grandeur are a known side effect of the hormone therapy he was receiving, according to Joakim.

November 2012: The president’s business travels and long-distance flights are canceled, and some of Putin’s meetings that the Kremlin had advertised turned out to be “canned food.”

From March 5 to March 15, 2015, Putin does not appear in public and all meetings are “canned,” meaning that pre-recorded events were presented as though they were happening right away.

The President travels to Abkhazia and Sochi with journalists from August 9 to 16 of this year, after which the Kremlin only releases stories on “canned food” for a week.

February 2018: The president postpones public events while running for office. Peskov acknowledges that the president “had a cold.”

Putin enters “self-isolation” from September 13 to September 29 in 2021, and all events are held via video link.

I can’t say for sure, but I believe it influenced his choices when he started the war in Ukraine.

The war-mongering leader’s drooped face, according to Joakim, was another indication that he was receiving hormone therapy, and it is possible that he had thyroid cancer as well.

The allegations support past intelligence reports that indicate Putin has become more erratic and paranoid.

“I had dealt with and watched President Putin for many years,” CIA director William Burns said last year, “and what I’ve seen, especially over the last decade, is him in a way stewing in a very explosive combination of grievance, ambition, and insecurity [that] are all kind of bundled together.”

Putin is becoming more isolated and has a delusional view of the true nature of war, according to the intelligence chief, whose inner circle is becoming smaller and his hold on power has grown tighter.

The Wall Street Journal said recently that Putin has avoided the internet out of concern for Western spying and relies solely on information from his personally chosen advisers who are reluctant to tell the truth.

Some of the updates from the front lines can take days to reach his desk, by which time the information is out of current.

His eager lapdogs routinely exaggerate Moscow’s victories and minimize its numerous setbacks in the conflict, giving Putin assurance that he will continue to press for triumph.

According to US intelligence, hardly a single senior Kremlin official who has Putin’s ear is willing to upset him or challenge his distorted vision.

Since Vladimir Putin began his bloody invasion of Ukraine, rumors that he has health issues have been circulating for years and have gotten worse.

According to critics and Kremlin sources, the leader has Parkinson’s disease or cancer, which is confirmed by video that shows him trembling violently and grabbing a table for support.

Additionally, he has frequently vanished from view for weeks on end, leading to speculation that he is getting surgery.

Putin’s health issues were originally alluded to by Valery Solovey, a professor at the Moscow State Institute of Foreign Affairs, who said that Putin had cancer surgery in 2020.

Another anonymous source claimed that Putin’s abdomen was the target of the procedure.

One is of a psycho-neurological type, and the other is a cancer-related issue, he stated.

I’m not a doctor, and I have no ethical need to disclose these issues if somebody is interested in the precise diagnosis.

The second diagnosis is significantly more dangerous than the first because Parkinson’s disease only affects how much one can appear in public.

People will be able to determine his life outlook based on this information, without even the need for specialized medical training, according to the statement.

Putin’s health is in perfect condition, according to the Kremlin, which has continuously disputed this.

His “gunslinger’s gait,” which is defined as a right arm swing that is noticeably smaller than a left arm swing and gives him a swagger, has been previously remarked by others.

According to the British Medical Journal, one of the hallmarks of Parkinson’s is an asymmetrically diminished arm swing, which can appear in “clinically intact people with a predisposition to subsequently develop” the condition.

Putin was observed in February forcefully grasping the side of his chair as he shook his hand.

He is shown introducing fellow strongman Alexander Lukashenko in the Kremlin in the video, which was recorded on February 18—the day before his invasion of Ukraine began.

He tries to calm the shaking by pulling his shaky hand inside his body, but as he unsteadily approaches Lukashenko, he nearly trips.

Later, as Putin sits in a chair, he grabs the arm for support and fidgets and taps his foot incessantly, unable to sit still.

The rumors were stoked by Putin’s awkward posture and his visibly swollen cheeks and neck during a meeting with the defense minister Sergei Shoigu.

Video captured Putin chatting to Shoigu while tapping his foot repeatedly and tightly holding the edge of the table with his right hand.

The claims have since been supported by his appearances hobbling and trembling his hands and legs.

Even military experts and armaments producers who the president met with were perplexed by his delusional state of mind.

Russia, according to FE agents, came within two weeks of winning the battle, but Putin stopped in their way.

According to the intelligence chiefs, the president personally intervened and disobeyed his generals, which meant that the military did not know what it was supposed to be doing.

Putin’s physicians recently reported a “major deterioration in his health,” according to the telegram channel General SVR, which claims to have insider sources in the Kremlin. They advised that he take a break from public appearances and rest.

The channel claimed that the president postponed many customary events and visits in December on the advice of his doctors.

It further stated that Putin “gets tired easily,” “has regular headaches and dizzy episodes,” and is prone to “clouding of awareness.”

It is asserted that the strains of his unsuccessful war in Ukraine are also having an impact.

According to one study, “constant nervous strain and involvement in issues at the front established a bad environment for the course of [his] ailments.”

He canceled scheduled appearances at a number of important events in December.

One of these was the sudden cancellation of a presidential trip to Pskov on December 28, which was officially attributed to “unfavorable flying conditions” despite weather predictions indicating clear skies.

The Russian president reportedly postponed a trip to the country’s largest tank manufacturing facility in Nizhny Tagil, in the Ural Mountains, and he also skipped his customary attendance at a gathering of his government’s ministers towards the end of the year.

Putin declined to hold his customary news conference in December, where the president regularly answers questions from reporters and viewers for up to four hours, and even called off his cherished end-of-year ice hockey game.

Since Putin gave the order to send soldiers across the Ukrainian border on February 24, there has been much speculation regarding his health.

In encounters with other international leaders, he has displayed odd fidgeting with his hands and feet and has appeared unstable during public appearances.

Alexander Lukashenko, the dictator of Belarus, was spotted shaking his hand before a meeting with him early in the war, which may have been a symptom of Parkinson’s disease.

In other photos, he can be seen firmly holding the edge of the table, perhaps in an effort to stabilize himself and stop trembling.

His apparent limp in his walk has also raised questions.

Oliver Stone, a filmmaker who had extensive access to Putin for a 2017 documentary, also publicly stated that he believed Putin had cancer but overcame it.

A Russian oligarch, whom New Lines magazine claimed to have a recording of, was heard suggesting Putin was “sick with blood cancer” around the same time.

A Russian investigative website named Proekt claimed to have documentation showing just one month prior that Putin travels with a sizable medical staff.

They included a resuscitation expert, a trauma expert who treated serious injuries, and a cancer expert.