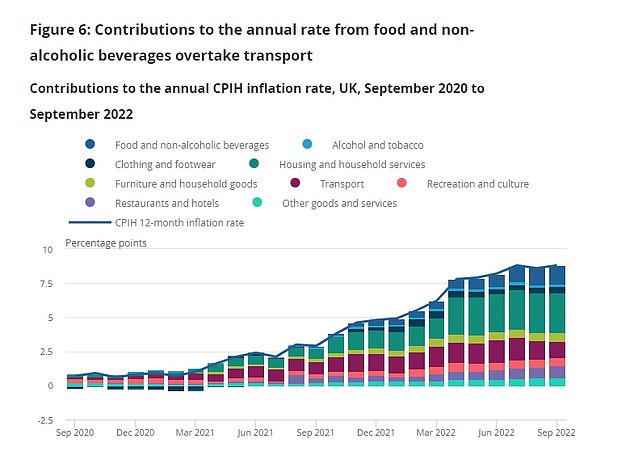 Britain has been warned that after Russia cut off grain shipments from Ukraine, food prices, which are already skyrocketing, might increase considerably more.

Exports from Ukraine were blocked when Russia withdrew from a historic deal that permitted the necessary supplies to be made across the Black Sea, alleging ‘drone strikes’ on its ships in Crimea.

To reduce the global food crisis brought on by the war, Turkey and the UN mediated an agreement in July between Russia and Ukraine to allow grain shipments.

The deal, which was set to expire on November 19, had previously permitted the shipment of more than nine million tonnes of grain from Ukraine.

The blockage increases the already rising cost of wheat-based goods throughout Europe. Nearly all bread and pasta goods have seen inflationary price increases in the UK, with some seeing increases as high as 63.6 percent.

The cost of basic goods including milk, butter, cheese, pork, and bread jumped by as much as 42% in September, the highest rates since 1980, it was revealed last month.

The cost of every food and drink item has increased since last year, according to data from the Office for National Statistics (ONS), as have energy prices.

Additionally, amid one of the biggest cost of living crises in decades, price hikes are not only occurring for food; they are also occurring for other products and services.

According to Darren Morgan, director of economic statistics for the ONS, “headline inflation returned to its level observed earlier in the summer after a minor decline last month.”

“The increase was caused by further price hikes in the food sector, which recorded its biggest yearly increase in more than 40 years. Hotel costs also rose after declining at this time last year.

‘These increases were largely offset by the continued declines in the price of gasoline, with airline rates dropping more than normal for this time of year and used vehicle prices growing less sharply than the significant gains witnessed last year.

“I realize that households all around the nation are battling with increased costs and greater energy bills,” Mr. Hunt said. The most disadvantaged will get priority assistance from this government, which will also achieve overall economic stability and promote long-term prosperity that benefits everybody.

With the Government’s energy price guarantee limiting peak inflation, “We have taken urgent action to prevent consumers and businesses from large increases in their energy bills this winter.”

The UK’s inflation rate hit another 40-year high of 10.1% last month, and technology company Yapily observed a rise in consumers utilizing financial tools to supplement their income as family budgets are being strained.

In the last year, more than one-third of consumers used credit cards for the first time, while 27% used “buy now, pay later” services and 18% fell into their overdrafts.

According to the study, businesses are also displaying symptoms of changing their patterns of spending and money management, with three-quarters using loans and business cards to manage cash flow during the last year.

According to Yapily, a lot of the financial features are enabled by open banking, which allows users to view all of their financial information in one location, including bills and various savings accounts.

But the fintech firm said that not enough people are aware of how the infrastructure can help individuals save money and get more inexpensive credit—clients of its platform include American Express and Intuit Quickbooks.

Yapily’s CEO and creator, Stefano Vaccino, stated: “Our study demonstrates that companies and consumers are looking for novel solutions to the cost-of-living challenge.

“Open banking also makes it possible for consumers to obtain better and more equitable financial services when they most need them.

But open banking’s ability to soften the effect of this inflationary strain will remain out of reach for the majority until it is more understood and put into practice.