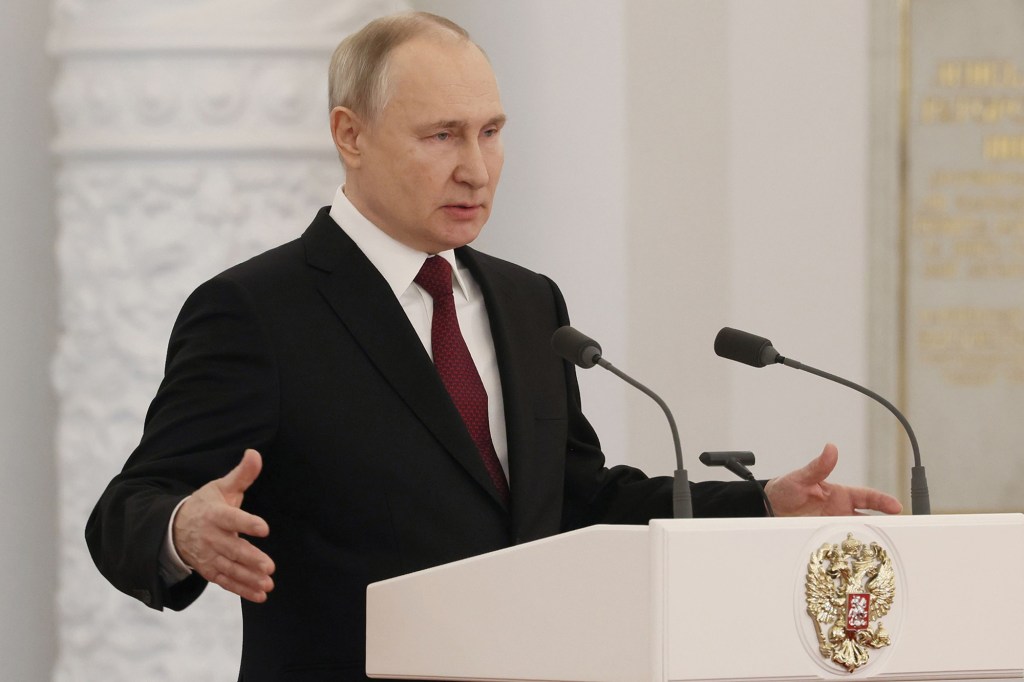 Putin stated, “There is a great deal of noise, gossip, and uproar throughout the universe.” It will not prevent us from performing combat duties.

He portrayed a series of Russian airstrikes on Ukraine’s energy plants and other critical infrastructure as appropriate retaliation for an Oct. 8 truck bombing of a vital bridge connecting Crimea to Russia’s mainland and other alleged Ukrainian attacks.

Thursday, Vladimir Putin promised to continue the invasion of Ukraine and defended the Russian military’s airstrikes against the infrastructure of Ukraine.

Putin stated during a ceremony at the Kremlin to present Gold Star medals to servicemen, “there is a great deal of chatter about our attacks on the energy infrastructure.” “Yes, we will do it. But who began it? Who attacked the bridge in Crimea? Who blew up the electricity wires connecting the nuclear power facility at Kursk? ”

While refraining from openly claiming responsibility for the strikes, Ukrainian officials applauded their success and hinted at their complicity.

Repeated attacks on Ukraine’s power grid, water, and gas utilities have left millions of people huddled in the dark and without heat as temperatures dropped below freezing.

Putin (front) raises a glass with attendees at a ceremony in St. George’s Hall of the Grand Kremlin Palace to award Gold Star medals to Heroes of Russia.
ZUMAPRESS.com

Dmitry Peskov, a spokesperson for the Kremlin, stated on Thursday that it was up to Kiev to end the violence by accepting Moscow’s terms of capitulation.

Peskov told reporters: “(Ukrainian President Volodymyr) Zelensky knows when it may finish.” “It might end tomorrow if he so chooses.”

The Kremlin has long maintained that Ukraine must accept Russian terms to end the ten-month-old conflict. It has demanded that Kyiv acknowledge Crimea, a peninsula of Ukraine that Moscow unlawfully annexed in 2014, as part of Russia and also accept Moscow’s other territory conquests in Ukraine.

Zelensky has repeatedly rejected these terms, arguing that the war would not end until the occupied lands are liberated or Russian soldiers withdraw.

Firefighters work to extinguish a blaze at a residential structure damaged by a Russian military strike in Bakhmut, Donetsk area, which has witnessed some of the most intense fighting of the war.

Thursday, in Kurakhove, Donetsk area, a woman stands beside the rubble of her home, the result of Russian shelling on Wednesday.
AP

Putin stated Wednesday that the war in Ukraine “may be a lengthy process,” a rare admission that it is taking longer than he anticipated to achieve his goals in the conflict.

He stated, for example, that the Sea of Azov “has become Russia’s internal sea” in describing Moscow’s territory gains as “a huge result for Russia.”

During a conference call with reporters, Peskov stated that Moscow’s goal was not to acquire new territory, but rather to reclaim control of regions in Ukraine from which it withdrew just weeks after merging them into Russia through fraudulent referendums.

Carpathian Sich Battalion soldiers are seen atop a tank on the battlefield in Lyman, Donetsk.

After earlier withdrawals from the Kyiv and Kharkiv regions, Russian troops withdrew from the city of Kherson and portions of the Kherson region, one of the four unlawfully acquired Ukrainian territories, last month.

Peskov stated, “Several new districts of the Russian Federation contain occupied lands that must be released.”

On Thursday, heavy fighting resumed, primarily in the regions Russia annexed. Wednesday saw 11 civilians murdered and 17 injured in Ukraine, according to Zelensky’s administration.

Recent combat has been concentrated on the Donetsk region. Ukrainian sources said that Russian fire attacked the settlement of Yampil, northeast of Sloviansk, during the transfer of humanitarian goods to people.