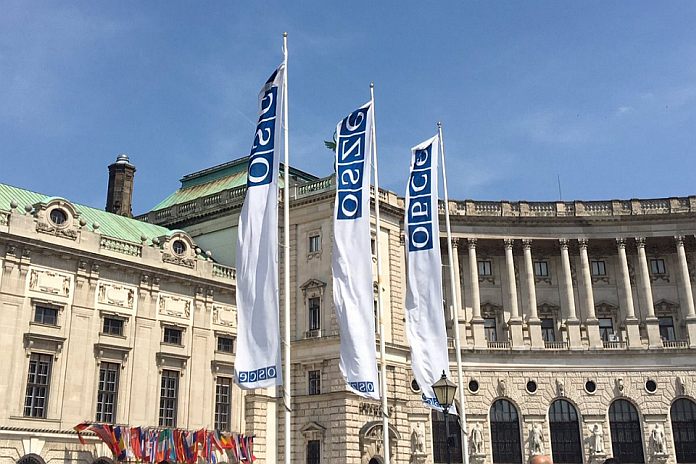 Mr Chair, thank you. This week, our valiant Ukrainian allies dealt President Putin’s misguided adventurism a serious setback. The announcement of Russia’s retreat from Kherson was an additional strategic failure and a clear acknowledgement that Putin’s invasion is failing. He and his generals have sent thousands of their own compatriots to their deaths with inadequate training, inadequate equipment, and inadequate leadership. Why are more and more Russian lives being sacrificed?
No amount of threats and propaganda can conceal the truth that Ukraine is winning this war, nor can they conceal the awful litany of atrocities and destruction left behind in the places where Russian soldiers withdrew. Putin’s justifications for the so-called “Special Military Operation” and attempted illegal annexations have been exposed as a charade by the retreat from Kherson. Putin’s Generals assured him that he could defeat Ukraine, but they had not prepared him for battle.
The retreat has also shown to the Russian public the Kremlin’s chronic and institutional poor decision making. Putin has accomplished nothing but isolationism and humiliation for Russia – a painful legacy for which millions of young Russians will be forced to pay for decades.
As winter approaches, Mr. Chairman, Putin, the Russian military, and the Wagner Group continue to inflict unimaginable agony on the Ukrainian people. Russia’s ongoing attacks on civilians and civilian infrastructure, including yesterday’s enormous strikes in Kyiv and across Ukraine, aim to instill fear and deprive families of shelter, light, and heat. Putin is exacting particularly brutal retribution for his military’s battlefield mistakes and his inability to crush the Ukrainian people’s spirit.
The military repercussions of Russia’s war in Ukraine have now reached the territories of neighboring nations.
Permit me to express my deepest condolences for the awful loss of innocent lives caused by yesterday’s missile landing in Poland. The United Kingdom stands in complete solidarity with its ally Poland. We categorically reject the Russian lie that this is a provocation. This war is the full responsibility of Russia, which may end it by withdrawing its military from Ukraine.
Mr. Chair, the next time this Forum meets to discuss Ukraine will be in December. Most certainly, the muddy ground will have frozen, and the evenings will be long and chilly. As they battle to liberate more of their homeland, however, the Ukrainian people will continue to exhibit their unwavering courage, commitment, and enduring moral fortitude.
In contrast, President Putin and his military leadership will be compelled to send an increasing number of recently mobilized family members, neighbors, and acquaintances, as well as Wagner’s criminals, to the battlefield to supply numbers in lieu of warriors and effective leadership.
The severe winter weather will magnify the effects of the persistent lack of training and equipment for soldiers pushed to the front lines. More dead, more bereaved families, more defeats, greater demoralized troops, and more discontentment among the Russian populace.
As we have seen in the chamber over the past few weeks, Mr. Chair, the Kremlin propaganda machine is trying to keep up with its own U-turns, shifting rationales, and altering narratives. Our Russian counterparts have contradicted both themselves and the Kremlin. Their misinformation effort tried to divert attention from military failures with more absurd allegations and false claims of epic proportions that could not withstand even the slightest scrutiny; they are the standard hallucination of an oppressor who has grossly miscalculated.
Under Kremlin directions, our Russian colleagues attempted and failed to recast Putin’s unjustified and savage war on Ukraine as an act of “self-defense.” Recently, they have even discussed establishing a new world order. The playwright George Bernard Shaw famously said, “The sensible man adjusts himself to the world; the illogical one persists in attempting to adapt the world to himself.”
For many nations, Russia’s willingness to invade a sovereign neighbor has been thrown into sharp light by Russia’s aggressive actions. As a result, the United Kingdom, together with other nations seeking a secure and stable future in the Euro-Atlantic region, is boosting its defensive capabilities, including through the NATO Defensive Alliance, to protect against Russia’s chosen course of naked aggression.
Mr. Chair, as the Ukrainian military and civilians defend their country against a violent and savage invader, neither they nor we undervalue the ongoing threat posed by the Russian Federation. The United Kingdom and the international community will continue to support the restoration of Ukraine’s sovereignty, territorial integrity, and independence for as long as it takes. Thank you.