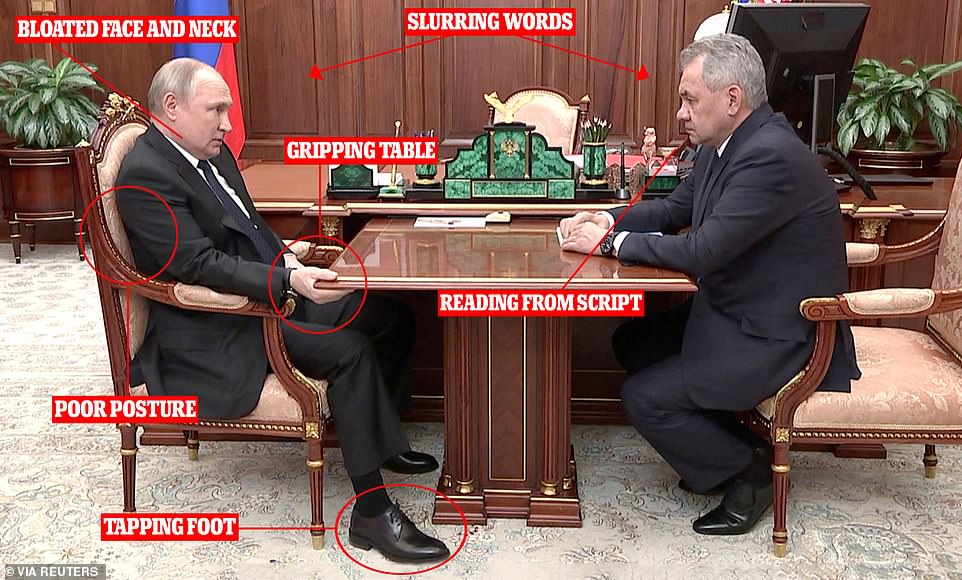 In a rare live appearance, Putin claimed Russia had ‘liberated’ the besieged Ukrainian city of Mariupol, as he savagely ordered Defence Minister Sergei Shoigu to seal off all routes out of the Azovstal steelworks where defiant Ukrainians are holed up ‘so that even a fly cannot pass through’.

But Putin’s poor posture and his apparently bloated face and neck sparked speculation about the Russian leader’s health, which has reportedly been in decline since his invasion of Ukraine.

Video showed Putin speaking to Shoigu whilst gripping the edge of the table with his right hand – so hard that it appears white – and tapping his foot consistently.

Shoigu does not appear to have fared any better in the eight weeks since Russia invaded Ukraine, with the defence minister slurring his words and reading from his notes following an apparent heart attack.

Anders Aslund, a Swedish economist and former adviser to Ukraine and Russia, said the video showed both Putin and Shoigu ‘depressed and seemingly in bad health’.

‘Shoigu has to read his comments to Putin and slurs badly, suggesting that the rumours of his heart attack are likely. He sits badly. Poor performance.’

Professor Erik Bucy, a body language expert from Texas Tech University, told The Sun Online: ‘It’s an astonishingly weakened Putin compared to the man we observed even a few years ago.

‘An able-bodied president would not need to keep himself propped up with a hand held out for leverage and would not be concerned about keeping both feet planted on the ground.’

‘This is not a portrait of a healthy Putin but one appearing increasingly feeble and barely able to hold himself upright at a small conference table,’ Bucy added.

Putin’s bloated face and neck has sparked claims he is undergoing steroid treatment, whilst reports have suggested Putin is ‘constantly’ accompanied by a doctor specialising in thyroid cancer.

Surgeon Yevgeny Selivanov, of Moscow’s Central Clinical Hospital, has flown to the Russian leader no less than 35 times in Black Sea resort Sochi, his favourite place of residence.

The respected doctor’s thesis – showing his area of medical expertise – was entitled: ‘Peculiarities of diagnostics and surgical treatment of elderly and senile patients with thyroid cancer’.

Meanwhile Shoigu, who is in charge of the bloody invasion of Ukraine, has been noticeably absent from public view amid reports the defence minister and Putin’s relationship has become strained after Russia’s military operation in Ukraine has led to more than 20,000 Russian troops being killed.

Last week, a Russian-Israeli businessman claimed Shoigu suffered a heart attack, which he suspects was caused by foul play.

Leonid Nevzlin claimed Shoigu had been in intensive car after suffering ‘a massive heart attack’ which ‘could not have occurred due to natural causes’, suggesting Putin’s longtime ally may have been the subject of an assassination attempt ordered by his boss.

Some have claimed Shoigu and Putin’s poor health is due to the faltering invasion of Ukraine.

During the televised meeting, Putin hailed the ‘liberation’ of Mariupol as a ‘success’ for Russian forces, and ordered a siege of the Azovstal plant.

‘There is no need to climb into these catacombs and crawl underground through these industrial facilities. Block off this industrial area so that not even a fly can escape,’ Putin said.

The British Ministry of Defence said today: ‘Putin’s decision to blockade the Azovstal steel plant likely indicates a desire to contain Ukrainian resistance in Mariupol and free up Russian forces to be deployed elsewhere in eastern Ukraine.’

There are at least 500 wounded soldiers inside the plant needing medication and surgery including amputations, while a number of elderly civilians are also in need of urgent treatment.

Defiant Ukrainians holed up inside the steelworks are still refusing to surrender Mariupol despite being surrounded by Russian forces.

Today, Captain Svyatoslav Palamar from the Azov Battalion insisted: ‘I always say that as long as we are here, Mariupol remains under control of Ukraine.’

Palamar’s comments are the first to emerge from inside the steelworks, the last remaining bastion of resistance in the city which has been razed to the ground, since Putin claimed victory yesterday.

He described the chilling sight inside Azovstal and its labyrinthine tunnels where scores of dead civilians are trapped in bunkers and under collapsed buildings after taking refuge there from the constant shelling.

The soldier told the BBC: ‘All the buildings in the territory of Azovstal are practically destroyed. They drop heavy bombs, bunker-busting bombs which cause huge destruction. We have wounded and dead inside the bunkers. Some civilians remain trapped under the collapsed buildings.’