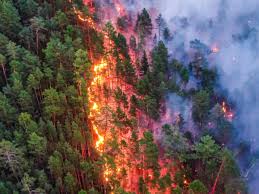 Russian President Vladimir Putin told regional officials on Tuesday to deal with forest fires in Siberia and said there could be no repeat of last year’s fire season, the worst on record.

In an online meeting shown on state TV, Putin said the ‘blazes’ were causing significant ‘material damage’ and posing a threat to life, the environment and the economy.

Putin said: “We cannot allow a repeat of last year’s situation, when forest fires were the most long-lasting and intensive of recent years.”

Acting Emergencies Minister Alexander Chupryan told Putin there had been 4,000 forest fires since the start of the year across 270,000 hectares – an area larger than Luxembourg.

The 2021 fire season was Russia’s largest ever, with 18.8 million hectares of forest destroyed, according to Greenpeace Russia.

Greenpeace said that “as of late April, wildfires were more widespread than at the same point last year, though they were below the average for recent years.”

Head of the forest programme at Greenpeace RUSSIA, Alexei Yaroshenko, says, much would depend on the summer weather, but that Russia was likely to see another historically large fire season.

Yaroshenko said: “Nothing has changed since last year. For now, we are likely to see another major fire season.”

Chupryan said 16 people had died in fires in the past week. At least eight people died in Siberia on Saturday as fires ripped through hundreds of buildings in several villages, with high winds hampering efforts to extinguish the blazes.

Wildfires have become more intense in Russia in recent seasons, helped by unusually high temperatures in Siberia, driven by climate change. They release millions of tonnes of carbon and other pollutants into the atmosphere each year.

Environmentalists fear “fires and hot weather may thaw the Siberian permafrost’ and peatlands, releasing even more carbon that has long been stored in the frozen tundra.”