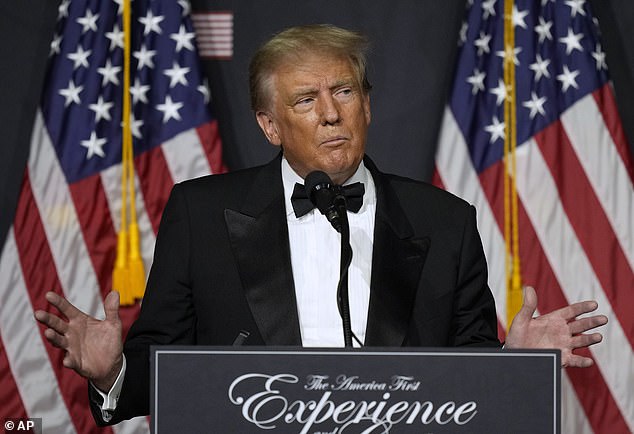 After a nearly four-year battle in which the former president fought tooth and nail to keep his financial statements hidden from public view, Donald Trump’s tax returns will be made public at noon today.

The Democratic-controlled Ways and Means Committee of the House of Representatives agreed Tuesday evening to release the returns after a more than three-hour debate behind closed doors.

Final vote tally: 24 to 16. All Democrats on the panel voted in support of the measure, while all Republicans voted against it.

Six years’ worth of Trump’s most recent tax returns and paperwork from eight of his businesses will be covered. They will undergo partial redaction.

Donald Trump has fought for years to keep the House Ways and Means Committee from accessing his tax returns.

This was the initial request made by committee chairman Rep. Richard Neal in 2019, following the retaking of the House majority by Democrats in the 2018 ‘blue wave.’

The former president engaged in a protracted legal struggle to prevent Congress from obtaining his tax returns, a battle that reached the Supreme Court.

It is unknown what fresh information will be uncovered when the returns are made public. The New York Times has previously published substantial investigations based on leaked tax information in 2018 and 2020.

In his final year as president, when his businesses improved in 2018/19, he was faced with a $1.1 million tax bill. However, once the pandemic struck, he recorded massive losses of $5 million, resulting in his paying no income tax.

Trump at the time refuted these conclusions. It is completely and utterly bogus news. Made up. Fake,’ he said.

Trump railed on his Truth Social platform prior to the committee’s decision to publish the returns.

He began by stating, “All the so-called experts who believe they know so much about my extremely successful private company actually know absolutely nothing.” It is a GREAT COMPANY with a lot of cash, some of the world’s greatest assets, and very little debt. Additionally, powerful in deductions and depreciation.

He said, “You will soon see these figures, but not all from my tax filings, which reveal relatively little.” “EVERYONE will be impressed, but the Fake News Media will not be pleased; therefore, oppose their narrative!”

Rep. Richard Neal, the committee’s Democratic chairman, stated following last week’s vote that the decision was neither punitive nor intentional.

The justices denied Trump’s last-ditch effort to prevent Democrats on the committee from obtaining financial data last month. There was no disagreement among the six conservative and three liberal jurists.

Rep. Kevin Brady, the ranking Republican on the panel, told reporters at a press conference following the vote, “Unfortunately, the deed is done.”

At his news conference, Brady stated, “Over our protests and opposition, Democrats on the Ways and Means Committee have unleashed a dangerous new political weapon that reverses decades of privacy protections for everyday taxpayers.”

He asserted that it had “nothing to do with the declared objective of examining the IRS presidential audit process.”

Throughout his speech, he emphasized the importance of Trump’s ‘personal’ tax returns.

Rep. Kevin Hern of Oklahoma, another Republican on the Ways and Means Committee, referred to the Democrats’ dispute over Trump’s taxes as a “witch hunt.”

Chairman Neal began his post-vote remarks by comparing the committee room’s arrangement to that of the US Capitol on January 6, when Trump supporters stormed the building and used furniture to block doors and windows.

Nonetheless, he stressed during his news conference that the decision to release the ex-tax president’s returns was neither punitive nor malevolent.

The committee issued a 29-page report indicating that the Internal Revenue Service was not adequately resourced or supported during the Trump administration.

After Neal’s speech, Nevada Democratic Representative Steven Horsford stated, ‘We take our duties seriously, and tonight’s decision was not taken lightly. However, we have a significant amount of work to do to rebuild the IRS.’

He stated that the tax agency has been underfunded by Republicans for more than a decade.

A later study released by the committee last week reveals that the IRS notably disregarded Trump’s tax returns during his presidency.

The report authored by Democrats emphasizes that IRS protocol necessitates an annual audit of the individual tax returns of the president and vice president in office.

The 29-page dossier notes, “The former President’s individual income tax returns for 2018, 2019, and 2020 were not picked for inspection until after he left office, and only the 2016 tax return was submitted to a necessary examination.”

It asserts that Trump’s 2015 tax returns were not even audited until 2019 when Democrats requested them.

The report states that on April 3, 2019, the IRS sent a letter to the former president informing him that his 2015 tax return was selected for examination. This corresponds to the date that the Chairman sent the initial request to the IRS for the former president’s return information and related tax returns.

According to the report, the required audit program was not a priority under the Trump administration, nor was it given with the necessary resources to assure compliance.

On Tuesday, the committee meeting began in public but swiftly moved into a private session that lasted more than three hours.

House Speaker Nancy Pelosi, Trump’s chief political opponent during his time in office, commended the committee’s work and urged for revisions to the IRS audit mechanism for US presidents.

‘The Ways and Means Committee’s serious oversight work has shown the critical need for legislation to ensure the public’s confidence in real accountability and openness during the audit of a sitting president’s tax returns — not just in the case of President Trump, but for every president. The American people deserve to know unequivocally that no one is above the law,’ the California Democrat said late Tuesday night in a statement.

Since day one, Chairman Richard Neal has upheld the critical oversight and legislative obligations of the committee with the utmost integrity.

Trump bucked decades of precedent during the 2016 presidential campaign by refusing to release his tax returns.

Since then, he has kept the information under wraps, but in 2020, a New York Times story uncovered nearly two decades’ worth of Trump’s tax paperwork. However, the most latest at the time, from 2018 and 2019, were not included.

This research indicated the former president evaded federal income taxes for 11 of the 18 years reviewed.

The documents revealed after Tuesday’s House committee vote will provide a more up-to-date look at Trump’s finances, but they will finish in 2020, meaning there will be no fresh information from the year after he leaves office.