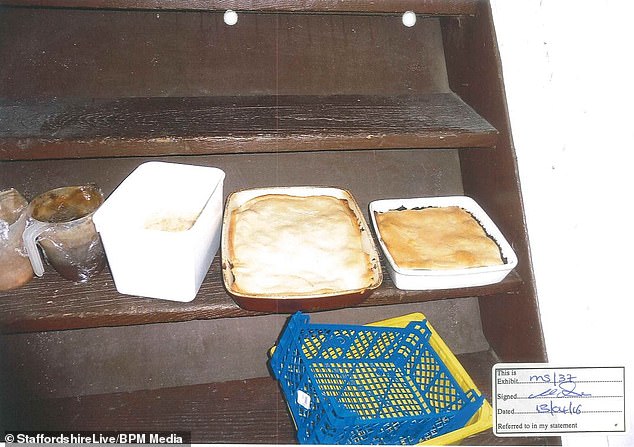 A former pub boss has been fined more than £3,000 after hygiene inspectors found mouldy food and unrefrigerated meat stored next to tools and paint.

When inspectors visited the George and Dragon in Alrewas, Staffordshire they found ‘extensive’ mould growing on meat pies and fisherman’s pie stored unrefrigerated on the floor of a dirty storeroom.

Richard Maley, 50, from Bridgend, Vale of Glamorgan, was the director of the company running the pub and restaurant when the offences occurred in 2016.

He has now admitted four charges of failing to comply with the Food Safety and Hygiene Regulations.

Maley is no longer associated with the restaurant, which now has a five-star hygiene rating and has been hailed as ‘well run’ by council bosses.

He had been due to attend North Staffordshire Justice Centre in 2017, but failed to turn up.

Lichfield District Council, which prosecuted him, said after the case: ‘His food safety offences presented a high risk of harm to the public and although Mr Maley is no longer associated with the premises, we were determined to follow through on the enforcement.’

At the time of the offences, Maley was the director of the Double R Pub Co Ltd. He pleaded guilty to a charge of placing on the market food which was unsafe either because it was ‘injurious to health’ or unfit for human consumption.

A container of cooked tomatoes was exposed to contamination, showing extensive mould growth on the surface, the court was told.

In a second charge, Maley admitted failing to ensure raw materials and ingredients were kept in appropriate conditions to prevent harmful deterioration and protect them from contamination.

In particular, there was an uncovered joint of roast pork stored unrefrigerated on a tray stored next to tools and paint.

There were also tubs of food – including part-cooked bacon, part-cooked sausages and cooked tomatoes – stored unrefrigerated and next to a bottle labelled ‘cleanPro +’, which is an odour neutraliser.

Two uncovered homemade cooked meat pies were found, as were a tub of uncovered cooked chicken, ham-and-leek filling, a covered jug of gravy and a covered jug of diced sausage and bacon stored unrefrigerated next to a box of DIY waste on dirty stairs.

The latter were next to an open rear door leading to the beer garden. Maley also pleaded guilty to failing to ensure the premises were kept clean, well maintained and in good repair.