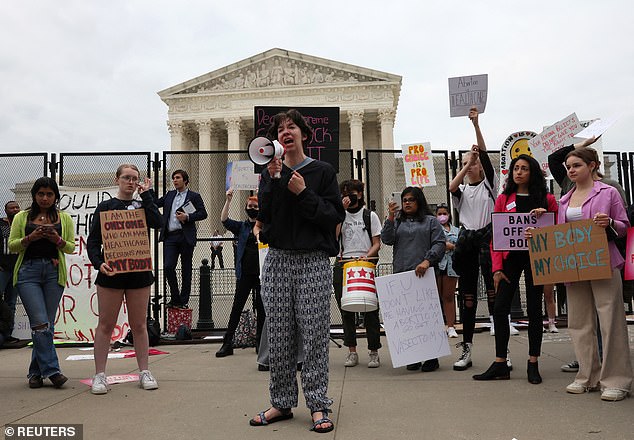 The comments came a day after she refused to condemn plans for protesters to show up at the homes of the right-leaning justices, after a leaked draft of an opinion suggested they planned to overturn the landmark 1973 abortion case – throwing the decision of whether abortion is legal back to the states. Psaki, holding her final press gaggle on board Air Force One, was asked by a reporter: ‘Does the president want protesters to influence Supreme Court justices so they uphold Roe?’

She pointed to Biden’s belief in peaceful protest, while adding that he also believes in the ‘the independence of the third branch of government.’

‘So I wouldn’t say he has a view on that,’ Psaki responded. ‘He believes in peaceful protests, but they’re going to make the decisions they make and we’re not going to prejudge a final opinion.’

‘Look, I think the president’s view is that there’s a lot of passion, a lot of fear, a lot of sadness from many, many people across this country about what they saw in that leaked document,’ Psaki said. ‘We obviously want people’s privacy to be respected.’

She added to the query, ‘I don’t have an official U.S. Government position on where people protest.’Reporting surrounding the leak of the draft opinion by Alito – which overturns the landmark 1973 abortion case that nationally legalized the termination of pregnancies – suggests he would be joined by Barrett, Kavanaugh, Thomas and Gorsuch.

Roberts, who has voted with liberals on some key issues like Obamacare, reportedly wouldn’t completely overturn the ruling.

‘Is that the kind of thing this president wants to help your side make their point?’ Doocy asked at Thursday’s press briefing.

‘We want people to protest peacefully if they want to protest. That is certainly what the president’s view would be,’ Psaki said.

She went on, ‘I think we shouldn’t lose the point here.’

During the briefing, she also suggested conservatives were making too big of a fuss about the leak.

‘I think what is happening here and what we think is happening here is there is an effort to distract from what the actual issue here, which is the fundamental rights,’ she told reporters. e Supreme Court justices into not overturning Roe v. Wade.