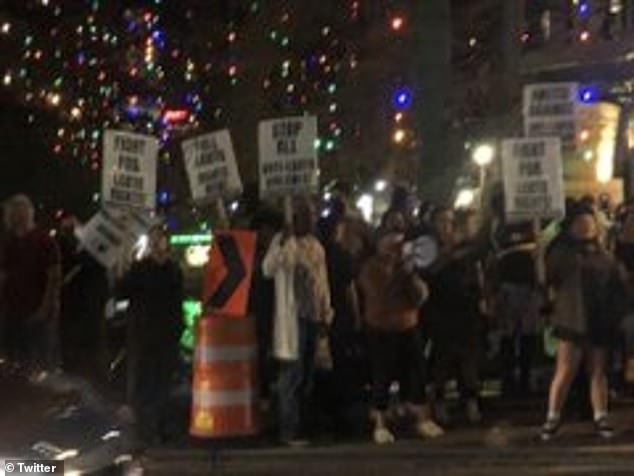 Armed protestors gathered outside a theater in Texas on Tuesday to voice their opposition to a drag performance with a Christmas theme, which they said was “grooming minors” and should be limited to audiences older than 18.

The rally against the performance of “A Drag Queen Christmas” at the Aztec Theatre in San Antonio, Texas, was organized by the This Is Texas Freedom Force organization.

In opposition to the scheduled rallies, protestors showed up to support the event, and police were also deployed.

A drag show in the city has been threatened twice already this month by protestors.

The This Is Texas Freedom Force contingent showed up for the scheduled demonstrations. The far-right organization has been classified by the FBI as extremist militias.

The TITFF, which made speculative assertions that the traveling performance was “grooming youngsters,” coordinated the demonstrations.

The group said on Twitter, “This could have been prevented, make the concert 18yo & up.” Even the opposition maintains that the program is not intended for children, so why let them in? Oh, you’re correct; they want kids there because it’s about grooming them.

The RuPaul’s Drag Race alumni-filled touring production has been on the road for two months leading up to Christmas. Despite what the TITFF asserts, the program does not advertise itself as a family-friendly or all-ages production.

On the other side of the street, a different group was holding megaphone demonstrations while carrying signs that said, “United against anti-LGBTA terrorism.”

Outside seven o’clock in the evening, the streets around the Aztec Theatre in San Antonio were crowded with people protesting both the drag performance and against it.

The demonstrations aren’t thought to have ever been violent. However, individuals and groups might be observed arguing with one another.

One guy was spotted fighting with demonstrators led by the far-right organisation while holding a canvas with a painted pride flag on it. He was taken back to where his group was protesting by a San Antonio policeman.

When trans lives are being attacked, what can we do? was chanted by a supporter of the drag act.

The other demonstrators reacted by saying, “Stand up, fight back.”

The protesters were armed on both sides. One of the drag event’s supporters informed Texas Public Radio that he showed up to the counter protest with a firearm to fight the intimidation of the far-right organization.

“I know that they want to scare people on the left with firearms, but they can’t do that if we’re also armed,” he remarked. We can resist attempts at intimidation, and to me, this is an expression of that. I’m not here to try to kill somebody or do anything of the like.

“There are individuals performing there, males who are skimpily clothed in women’s underwear, and other things like that. That is no place for a youngster.”

It’s unclear if the drag show ever said that it was intended for kids.

According to journalist Ford Fisher, members of the Patriot Front, a white supremacist organisation, were among the protesters. “Strong families, strong country,” they shouted.

Around 10.30 p.m., after the drag act ended, the protests ended without incident.

However, this is not the first time that a drag performance has been endangered by protestors.

Another theater in San Antonio canceled drag performances earlier this month for the foreseeable future. The Starlighter said that they were being “bullied and intimidated” and “made to feel insecure in our own area.”

They said that they will stop holding drag shows for the rest of the year out of concern for the security of their drag queens, employees, and customers.

This has escalated into a heated topic throughout the United States, resulting in several altercations.

On December 10, while demonstrators were boycotting a drag reading program for children, there was a violent altercation in the New York Public Library that led to confrontations in New York.

Like several other events around the nation, the drag show received unwarranted criticism. In one instance, attendees of the event angered members of a local conservative organization.

As the kids were segregated securely in another room, the protesters gathered.

A guy was observed encouraging demonstrators while insulting and demeaning parents holding banners that said things like “Leave our kids alone,” “Shut it down,” and “Respect childhood.”

After the guy grabbed a sign from one protester’s hands and touched a plain-clothes police officer, the altercation eventually became violent.

The guy was detained and charged with disorderly behavior, harassment, attempted assault, and impeding governmental administration while a mother escorted a little kid away from the chaos a few feet away.