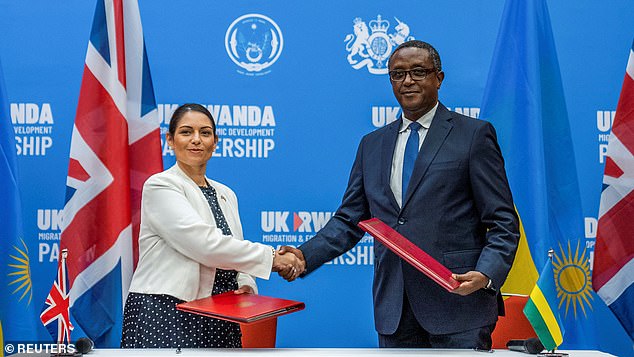 Priti Patel’s new scheme for sending failed asylum seekers to Rwanda will start next week, it has been reported.

The first migrants to be sent to the central African nation will be single men and it is expected that they will be notified by Home Office lawyers in the next few days, according to The Sun.A Home Office source told the newspaper: ‘The first referrals will be going next week, so people will be put on notice.’

The Home Secretary’s team is ready for legal challenges, while Boris Johnson lashed out at ‘liberal lawyers’ for delaying his plan to send thousands of migrants from the UK to Rwanda – and vowed to ‘get it done’. The Government had wanted flights to Kigali to start by the end of May under the £120million deal it secured with the Kagame government last month.

Under the partnership agreement, people arriving in the UK, including by crossing the Channel in small boats, will be flown 4,000 miles to East Africa if they are deemed to have travelled illegally for economic reasons rather than asylum.But No10 said it could not put a timescale on when the scheme will begin. Last week two asylum seekers who came to Britain in the backs of lorries this year instructed lawyers to bring a legal challenge against the policy.

It comes as analysis of Government figures shows 7,240 people have reached the UK after navigating busy shipping lanes from France in small boats in just the past four months since the start of 2022.

They include almost 700 people who have crossed in the past week under favourable weather conditions.Critics said the 11-day break had simply been due to the poor weather, and insisted that the Home Secretary’s Rwanda policy would not act as a deterrent to those seeking to reach Britain.

Anxious Border Force officials have now suggested that further delays to the Rwanda scheme will only embolden migrants to attempt the dangerous voyage, warning that the Channel crisis could ‘get worse before it gets better’.

The MoD took over control of migrant operations in April, when the Government also announced controversial plans to send some of those making the cross-Channel journey to Rwanda.