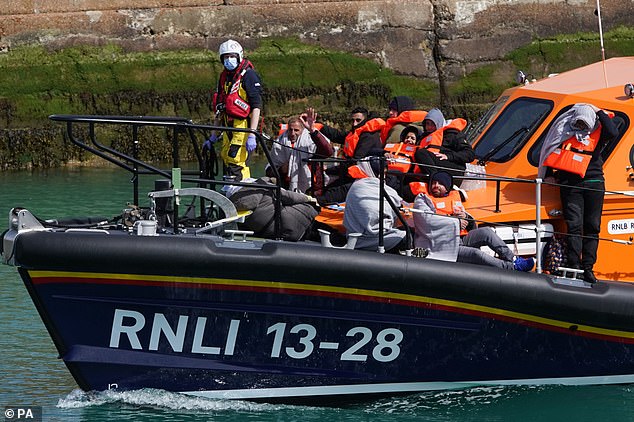 In her latest war of words with the broadcaster, the Home Secretary accused the corporation of ‘stereotyping’ the central African nation and ‘showing prejudice’.

She told the Sunday Telegraph: ‘I was quite taken aback just by the tone of [BBC journalists’] references to Rwanda.’

The corporation’s coverage had ‘undercurrents’ of xenophobia similar to points made by opponents of the deal, she said.

Patel stated: ‘When you hear the critics start to stereotype, start to generalise, first of all that’s all very offensive. It’s deeply offensive, and it’s based on ignorance and prejudice, some of this, in my view.

‘I could call them lazy and sloppy characterisations, but actually they’re not.

‘I was in Parliament on Tuesday and there are undercurrents, if I may say so, of just sheer xenophobia, which I think is absolutely appalling.’

A BBC spokesman, responding to the comments, said: ‘The government’s agreement to send some asylum seekers to Rwanda led to considerable public debate.

‘Journalists from the BBC and other media were there to report the story and ask questions about the plan.’

ust weeks ago the government-appointed Ofcom chair and Tory grandee Lord Grade criticised the BBC licence fee ‘regressive’ in an appearance before MPs.

Lord Grade, 79, spoke in favour of privatising Channel 4 and attacked the BBC’s coverage of events such as the Downing Street parties as ‘gleeful and disrespectful’.

The former controller of BBC One reiterated his critique of the licence fee’s unfairness, stating: ‘I didn’t think that was an opinion, I thought that was a statement of fact, actually.’

Earlier this year the Culture Secretary Nadine Dorries hit the Corporation with a two-year licence fee freeze – as her allies warned that ‘the days of state-run television are over’.

Tense negotiations between the Government and the BBC over the cost of the annual fee until the end of 2027 concluded in January, with Ms Dorries deciding to hold the licence at £159 for the next two years.

Officials calculate that the Corporation will have to find savings of more than £2 billion over the next six years as a result of the freeze.