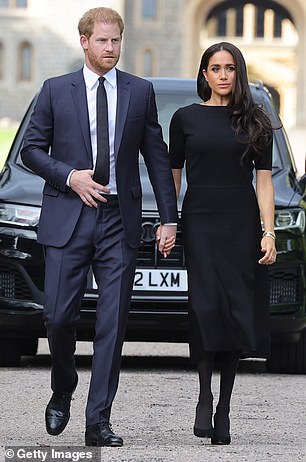 According to royal analysts, Prince Harry may visit the UK to promote his contentious new book, Spare, which might result in reprisal from the palace, including the removal of his and Meghan Markle’s Sussex titles.

According to rumours from last night, Harry may go to the UK in the new year to clarify his “purpose” in publishing the book, which is expected to cloud the Royal Family’s Christmas.

Senior royals are reportedly “bracing themselves” for the 416-page book’s January 10 release.

The Sussexes’ response to the biography will decide their future, according to biographer Tom Bower.

It won’t make for a peaceful family Christmas, to put it simply, a source told the Mail on Sunday.

The book’s publishers, Penguin Random House, claim it is written with “raw, uncompromising honesty,” and it is anticipated to include shocking new information about Harry’s early life and his falling out with “The Firm” after meeting Meghan.

The book is more worse than people realize, the person said.

The Sun quoted Bower as saying, “This book is definitely make or break.” King Charles has probably been informed that any reprisals won’t be nice.

The only thing King Charles can truly do is deny his grandchildren Archie and Lilibet the titles. In the end, I guess he could also strip Harry and Meghan of their titles, although that would be rather extreme.

I’m not sure what more he could do. If it is as horrible as I believe it to be, Harry and Meghan have completely lost their minds.

The wisest course of action for the royal family in this situation, he said, would be to “sever connections” with the couple.

The term is said to allude to Harry as the “spare” to Prince William’s “heir,” but translations into other languages make it seem more sinister.

It will be referred to as In The Shadow in Spain, The Other in Sweden, and The Reservist in Denmark.

Although voice actor Emily Woo Zeller cautioned: “To take words off a page and make them seem like speech is a talent,” Harry will narrate the audio version himself. I’m not sure whether Harry has that talent.

It comes as news broke on Friday night that Prince Harry, in the midst of the controversy, will not be traveling back to the UK for the first Christmas since the passing of Queen Elizabeth II.

Relationships between Harry and wife Meghan and the rest of the royal family are “at rock bottom,” according to sources close to the pair, and they may turn down an offer to spend the holidays with Harry’s family.

It was thought that following the Queen’s passing, ties might warm up a little, but insiders informed The Mirror that the pair had ‘no plans’ to visit the UK for Christmas.

The title of the book allegedly caught the other members of the royal family off guard.

Another insider informed The Mirror that any attempts at reconciliation between the Sussexes and the royals might be “at an end” as a result of the book: It’s heartbreaking to think that this book could put a stop to any connection that Harry wishes to have with his family.

The book will not be available until January 10 despite an earlier publication date of “late 2022” that was set in order to capitalize on the lucrative Christmas market. This is reportedly because the duke requested last-minute changes and as a token of respect after the death of the Queen.

Last night, a King representative refused to respond to questions about the book. The Royal Household has reportedly already been informed that the 416-page, £28 book is “critical of everyone and everything,” and they are “dreading” it.