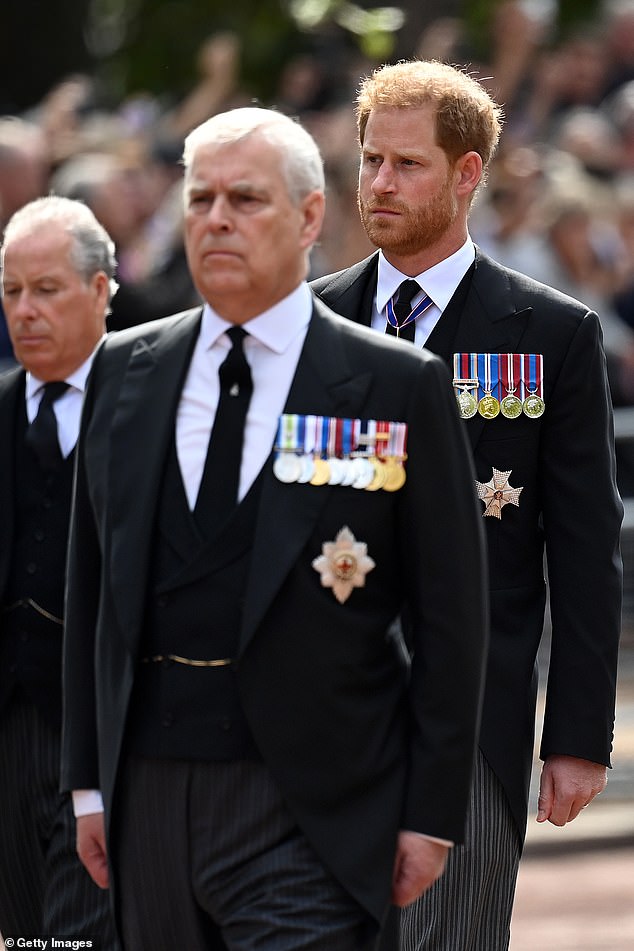 The House of Lords will be debating a proposal that would prohibit Prince Harry and Prince Andrew from serving as secretaries of state. This would result in additional modifications to their positions. The change to tomorrow’s Counsellor of State bill will seek to exclude royals who have “not regularly performed royal duties in the prior two years.”

The Telegraph says that a Cabinet source claimed neither the Government nor Buckingham Palace held the stance that the measure would strip any prince of his role as Counsellor of State.

Viscount Stansgate, a Labour peer, informed the House of Lords that it was time to negotiate “a sensible modification” with the King.

On January 8, 2020, Prince Harry and Meghan Markle announced their retirement from royal duties via Instagram, a move the British press nicknamed “Megxit.”

In an interview with US television personality Oprah Winfrey conducted in March of last year, the couple expressed their grievances with the Royal family.

Later that year, they signed a multimillion-pound contract with Netflix for a bizarre series.

On January 10, Penguin Random House will publish the book Spare by the Duke of Sussex, which will be more than four months after the death of Her Majesty on September 8.

Last week, it was reported that Prince Andrew was plotting a “fightback” as he remains adamant that a return to public life is still feasible.

It comes after Andrew’s accuser, Virginia Giuffre, said she’may have made a mistake’ when she accused Alan Dershowitz of sexual abuse and dropped her case against him last week.

Last night, a source stated, “Everything has changed, and Andrew is determined to fight.”

62-year-old Andrew reportedly paid 39-year-old Giuffre £12 million to settle a civil dispute in which she accused him of sexual abuse. He has always and vehemently denied the allegations.

Yesterday, he had spent time on the Windsor estate shooting with Princess Anne, Prince Edward, and other members of the Royal Family.

King Charles was also spotted in Windsor and is said to have joined his brothers and sisters in the afternoon.

Two days prior to His Majesty’s 74th birthday, however, a Buckingham Palace insider confirmed that the King did not attend the filming.

At lunch with Anne, her husband Tim Laurence, and Edward and his wife, the Countess of Wessex, the Duke appeared calm.

On the Windsor estate, Sophie Winkleman, wife of Freddie Windsor, was also spotted with the Royal party.

The photographs of the family meeting revealed that Andrew, far from being alone, still enjoys the support of his relatives. However, he will not be at the Cenotaph today, as he is no longer permitted to attend Royal functions.

Andrew, who served in the Royal Navy during the 1982 Falklands War, was also absent from yesterday night’s Festival of Remembrance at the Albert Hall, which honored those who fought in that fight.

The Mail on Sunday said last week that Andrew was left “bereft” and in tears after the King made it obvious to him that he had no chance of returning to “the Firm.”

The Duke is claimed to have been ‘blindsided’ by the conclusion of the private meeting conducted at Charles’ Scottish estate Birkhall days before the Queen’s death. Sarah Ferguson, his ex-wife and staunch supporter, was ecstatic upon hearing of Miss Giuffre’s retreat. A friend added, ‘There is a sense that Andrew desires a new life, but the king is the only person who can agree to that. Now that we have a new King, these discussions will need to begin from scratch.

Prince Andrew is anticipated to be invited to Christmas at Sandringham, but according to a source, the Duke’s profession is not the King’s first priority.

An insider stated, “As King, Charles’ inbox is extremely crowded.” Previously, senior royal advisers stated that the Duke of York would be supported by the family in his efforts to build a new life away from the public eye.

A family holiday? Harry and Meghan refuse to accept.

The Duke and Duchess of Sussex are unlikely to spend their first Christmas without the Queen with the Royal Family in Sandringham.

It is believed that King Charles welcomed Meghan and Harry, who remain’much-loved’ family members despite leaving Royal duties over three years ago. According to a source close to the King, however, attendance is improbable.

Charles will hold the annual family reunion and Christmas vacation at his Norfolk castle for the first time.

The Prince and Princess of Wales will be present, staying at Anmer Hall, the residence the Queen gave them.

On Christmas morning, additional family members are likely to accompany the King and Queen Consort on their walk to church.

There will be some members of the Royal Family who will be relieved if the Sussexes submit their regrets.

After Meghan’s ‘complex’ description of the late Queen’s burial, the Sussexes’ presence over the mince pies may not go over well.

Harry is preparing to unveil his explosive memoirs and a Netflix series in the New Year.

His book, Spare, will include a sad account of his mother’s tragic demise, according to the publishers.

King Charles was “displeased” by Princess Anne and Prince Edward’s support for the Duke of York at their shooting party.

By Kate Mansey for The Sunday Mail

Last Saturday, Prince Andrew was spotted at a shooting party on the Windsor estate with two of his siblings, a gathering from which King Charles has sought to distance himself. As a result, relations at the top of the Royal Family have deteriorated significantly.

Two days before His Majesty’s 74th birthday, Princess Anne and Prince Edward, together with other members of the Royal Family, were spotted at the Windsor shoot.

However, what was meant as a show of support for the beleaguered Duke of York has had negative effects on their relationships with the new King.

A source told The Mail on Sunday that the King chose not to attend the shoot and was unhappy that his younger brother Andrew was present.

The source stated, “King Charles reportedly disapproved of Edward and Anne’s public meetings with Andrew and wanted it made plain that he had not participated in the filming.”

Anne and Edward were quietly worried about Andrew and desired to check on him.

However, Charles believes he should not be in the public eye. His Majesty was not at all pleased.

While Andrew is scheduled to be met by the King at Sandringham for Christmas, he will not participate in the Royal Family’s traditional Christmas Day stroll to St Mary Magdalene Church.

However, Andrew is not the only sibling with whom the King is rumored to have cold ties.

Despite their relentless support of the late Queen and now the new King, the Earl and Countess of Wessex do not appear to be in the inner circle of the new monarch.

After his father’s death a year and a half ago, many anticipated that Edward would acquire the title of Duke of Edinburgh. However, he has not received this title.

Once upon a time, it seemed so apparent that Prince Edward would inherit his father’s title that it was included on the official Royal website.

Today, it is still unknown whether or when the King will bestow the honor. According to a source close to the Royal Family, “it has not gone unnoticed.”

»Prince Harry may be ‘banned’ from subbing for King Charles«