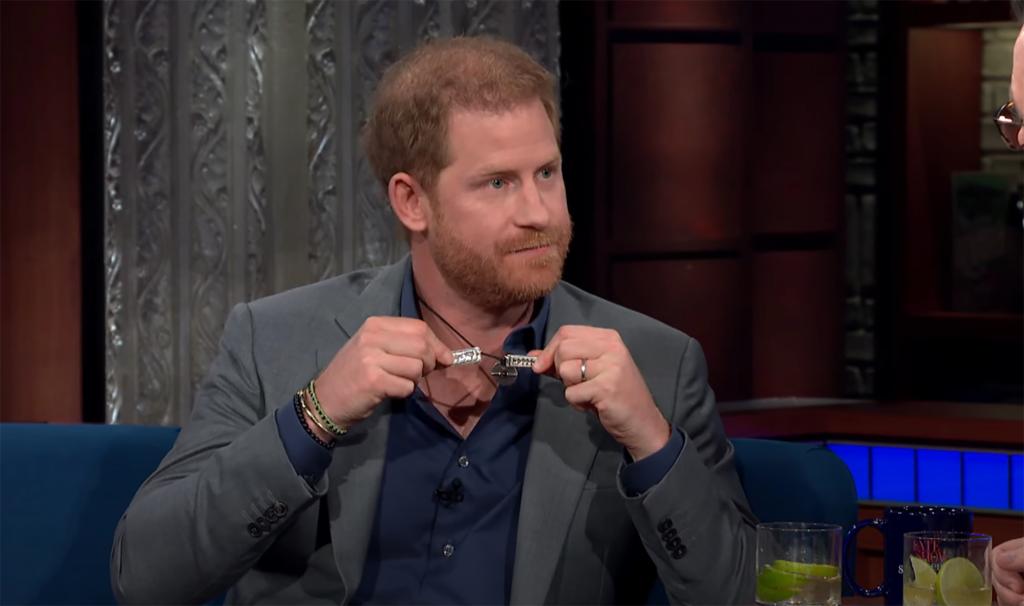 The bling of a royal.

During the interview, the Duke of Sussex discussed his nicknames, his late mother, and his military career, as well as the explosive argument he wrote about with his brother Prince William.

“There is a lot of chatter about the physical altercation between the two of you, in which he shoved you down in the kitchen and you broke the dog bowl when you landed on it,” Colbert continued, before asking, “It says he destroyed your necklace. Which necklace did he just break?”

“This one, which is now fixed,” Harry responded, displaying a black cord adorned with three charms.

“My wife gave me a pair of silver pendants engraved with my children’s cardiograms,” he said, referring to his son Archie’s and daughter Lilibet’s cardiograms.

“And a friend of mine in Botswana made this for me, which has tiger’s eye on it,” he said, referring to a third, spherical charm with the golden gemstone, which is believed to protect its wearer and encourage self-confidence and inner strength.

One of the pendants contains tiger’s eye, which is believed to provide protection to the owner.
Late Night with Stephen Colbe

It makes fitting that Markle would have given the heartbeat pendants to her husband, as she also enjoys emotive glitter. The duchess has been seen wearing gold zodiac chains with Virgo and Taurus charms for Harry and Archie, respectively, as well as diamond constellation necklaces for Archie and Lili.

In addition to wearing Archie’s and Harry’s birthstones on the diamond eternity band she stacks with her engagement ring, Markle also possesses a lapis lazuli pendant, which is thought to encourage wisdom, intuition, and honesty.

Prince Harry describes an alleged argument with his brother, Prince William, in “Spare.”

During a 2019 altercation at Nottingham Cottage, Harry alleges his older brother called Markle “difficult,” “rude,” and “abrasive,” following which the Prince of Wales allegedly struck him.

His necklace may have been repaired, but it appears that the relationship between the siblings remains fractured.