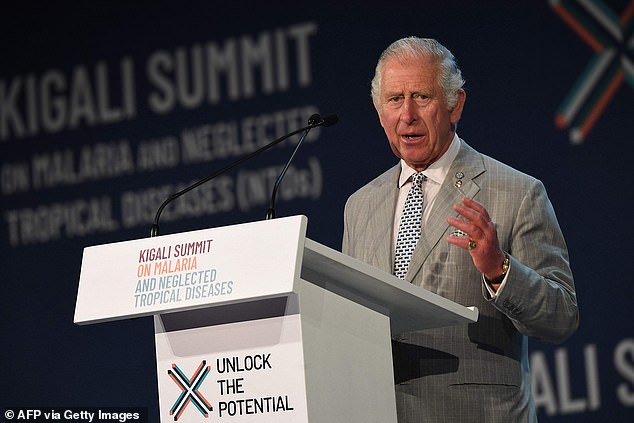 Prince Charles has urged Commonwealth leaders to cooperate and act in order to steer the world toward a future that is more sustainable.

The Prince of Wales suggested that leaders of the international community, which he referred to as a “common market,” cooperate to address sustainability challenges during a meeting of his Sustainable Markets Initiative (SMI) in Rwanda.

The Prince created SMI in 2020 to help expedite the world’s transformation into a sustainable future.

The president of Rwanda, Paul Kagame, the prime minister of Canada, Justin Trudeau, and the president of Fifa, Gianni Infantino, were among the speakers who addressed the gathering. He said, “If we can commit to being bold in our ambition—but more importantly in our action—the Commonwealth, as one of the world’s largest “common markets,” has a real opportunity to lead the world in the right direction.”
The assembly was informed by the heir to the throne that he had been working with SMI for the previous three years and that he now had more than 300 chief executive officers all over the world.

In reality, he continued, this meeting had been planned for three years.

The chief executives represent assets totaling $700 trillion, and according to him, they “want to help accelerate the global green economy.”

But, he continued, “Ladies and gentlemen, they cannot achieve this without your assistance.”

For business and investors to know where to invest in renewable energy, sustainable infrastructure, sustainable aviation fuel, or regenerative agriculture, we need to be clear on the enabling environment and the demand signals.

For the first time since he was chosen to succeed her as head of the international “family of nations” in 2018, Charles is standing in for the Queen at the Commonwealth Heads of Government Meeting.

He discussed how efforts to eradicate malaria had been thwarted by coronavirus in a meeting with other Commonwealth leaders.

Speaking to attendees at a symposium on malaria and neglected tropical diseases at the Intare Conference Centre in Kigali, he remarked, “As we emerge from the pandemic, 2022 must be a turning point.”
‘
Since Covid-19, the world has become more aware of infectious diseases, and we must take use of this awareness to offer the necessary support for anticipating and responding to infectious disease epidemics.

There is still much to be done if our goals are to be achieved, largely because of the Covid-19 pandemic.

The Prince, who is the president of Malaria No More Uk, met Melinda French Gates and Dr. Tedroos Adhanom-Ghebreyesus, the director general of the World Health Organization, there.

During the visit, Prince Charles received a certificate of adoption for an injured crane, which was a lighter moment.

Umusambi Village, which is home to more than 50 endangered crane species, is Kigali’s first wildlife refuge.

The bird’s adoption certificate was given to him by Olivier Nsengimana, the president and founder of the Rwanda Wildlife Conservation Association, who also told the Prince that she was now his. You owe it to me to stay updated.

Earlier this week, the Prince and the Duchess of Cornwall arrived in Kigali. He entered Rwanda as the first member of the Royal Family.

In order to “listen and continue to learn” about the important issues that the Commonwealth countries are experiencing, particularly with regard to climate change, economic development, opportunities for the young, and gender equality, Charles is scheduled to attend a number of meetings during his visit.