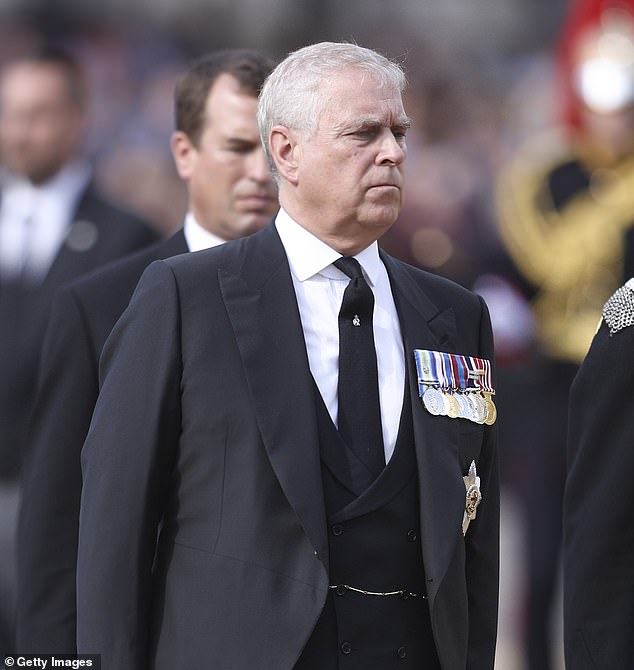 Friends assert that Prince Andrew felt ambushed into giving up his royal titles and is now plotting a “fightback.”

This comes after his accuser, Virginia Giuffre, withdrew her complaint against renowned US attorney Alan Dershowitz last week, claiming she’may have made a mistake’ in claiming he harmed her.

According to rumors, the Duke of York is becoming increasingly irritated with his settlement with Miss Giuffre for silencing him.

62-year-old Andrew reportedly paid 39-year-old Giuffre £12 million to settle a civil dispute in which she accused him of sexual abuse. He has always and fiercely refuted the allegations.

According to sources close to Andrew, he feels limited by the legal agreement and desires retaliation in light of the most recent development.

In January, he reportedly felt surprised when key advisors persuaded him to depart from royal life.

Friends believe that Prince Andrew (seen in September) felt ambushed into relinquishing his royal titles and is now plotting a “fightback.”

A source told The Sun on Sunday that the situation resembled a pressure cooker. There was no breathing room.

He was unaware of the repercussions. He was essentially compelled to resign. He felt surprised.

The next day, the Duke was invited to Windsor Castle, where he reportedly felt ambushed by three senior royal advisers, according to newspaper sources.

Sir Edward Young, the Queen’s private secretary, who has retained his position for the King, Lord Andrew Parker, the then-Lord Chamberlain, and Sir Michael Stevens, the Keeper of the Privy Purse, were there.

Under “extreme pressure,” Andrew consented to defend himself in the lawsuit.

He maintains, however, that he was persuaded to assume that his titles and patronages would be suspended ‘under the protection of his mother’ until his legal problems were in order.

62-year-old Andrew reportedly paid 39-year-old Giuffre £12 million to settle a civil dispute in which she accused him of sexual abuse. He has always and fiercely refuted the allegations. This photograph was taken in 2001, when Giuffre was 17 years old.

Virginia Giuffre (left), the accuser of Andrew, abandoned her case against American attorney Alan Dershowitz last week, stating that she’may have made a mistake’ in accusing him of sexual molestation. Giuffre is seen here in 2019 with her attorney David Boies.

Miss Giuffre also sued Mr. Dershowitz in 2019, alleging he defamed her by denying charges that she was trafficked to the attorney between 2000 and 2002 by Epstein.

However, on Tuesday she consented to dismiss the charges and confessed she “may have made a mistake” when she also accused him of sexual abuse.

Andrew and Dershowitz are presumed to be communicating via a third party.

According to those close to him, the Duke of York is “regaining his vigor and prepared to battle.”

It remains to be seen, though, how Andrew will mount a comeback. He signed a gag order prohibiting him from denying having sexual relations with Giuffre when she was 17 years old.

She alleges that she was held as a sex slave by the late pedophile Jeffrey Epstein and mistreated by him, his then-girlfriend Ghislaine Maxwell, and members of their social circle for a number of years.

Last night, it was reported that Prince Andrew was organizing a “fightback.” On Saturday, he was photographed visiting the Windsor estate with Princess Anne, Prince Edward, and other members of the Royal Family.

The Duke of York is anticipated to be welcomed to Sandringham for Christmas.

Yesterday, he was not present at the Cenotaph, as he is no longer permitted to attend Royal functions.

On Saturday night, he was also absent from the Festival of Remembrance at the Albert Hall, which honored those who fought in the 1982 Falklands conflict, in which Andrew served with the Royal Navy.