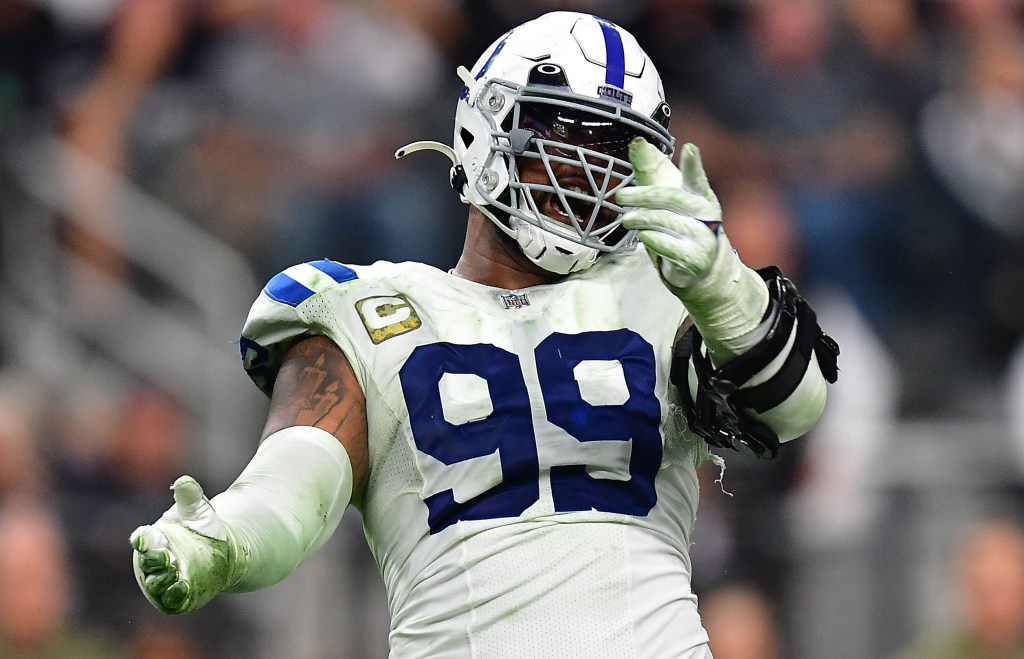 An inside look at Sunday’s Week 17 clash between the Giants and Colts at MetLife Stadium.

Pressure up the gut is always a concern, and the Giants are susceptible there. Buckner is a seasoned veteran, a 6-foot-7, 295-pound athlete with a track record of success from his four years with the 49ers and three years with the Colts. In his career, he has recorded 53 sacks, including eight this season, in addition to 18 quarterback hits. Buckner got 1.5 sacks against the Chargers last week.

The starting guards, Mark Glowinski and Nick Gates (with Ben Bredeson likely getting the majority of snaps at left guard), and center Jon Feliciano’s performance has been inconsistent, with some good and some bad. Grover Stewart, who lines up next to Buckner, has four sacks.

This New Year’s Day game will be played in exceptionally warm weather, and the Giants want to put the pressure on a competitor ready to close off the season. The defense is getting healthier, and the Colts do not provide many scoring threats without star running back Jonathan Taylor. Saquon Barkley appears to be due for a long one. This should be the day that the home team rings in 2023 in grand fashion.

No Giants player who will play on Sunday has ever participated in the playoffs with the team. Despite the fact that this is all new for so many of them, there are a large number of college athletes with experience in bowl games and rivalry games. Is it applicable to the NFL and these win-and-in contests?

“I’ve never been to a playoff game, so I don’t know what the playoffs are like,” said Andrew Thomas, a three-year starter at Georgia. “I believe it is distinct. At Georgia, we took a week vacation from playing against lesser colleges and similar opponents. Every week in the NFL, you face the best players in the world.

A look at the NFC wild-card situation prior to the Giants’ game against the Colts, which they must win to advance.
NY Post illustration

Mark Glowinski spent five years with the Colts, and he occasionally encountered Jeff Saturday at the club facility. Why then? Saturday was a member of the Colts’ royal family after 13 years as the starting center.

Glowinski, the Giants’ starting right guard, stated, “It’s not like he was a major influence on anything, maybe when he was playing years ago and stuff like that.” When the Colts fired Frank Reich after a 3-5-1 start, team owner Jim Irsay suddenly appointed Saturday as interim head coach despite his lack of professional or collegiate coaching experience. Saturday won his first game, but since then the Colts have lost five consecutive games.

“Yeah, it’s obviously a bit different than what you normally see,” Glowinski said of Saturday’s employment. “They claim that was exactly what their team needed to get rolling. We shall see what transpires.

Top and bottom: Every coach will say this nearly every week: turnovers will determine the outcome of the game. Sometimes it is the case. This game features the league’s sturdiest and sloppiest teams. The Giants are tied with the Lions for the fewest turnovers with 15, as they have lost nine fumbles and thrown six interceptions. The Colts represent the opposite extreme of the spectrum. Their turnover total of 30 (13 lost fumbles, 17 interceptions) is the highest in the NFL, and their giveaway-takeaway ratio of minus-13 ranks 32nd.

Nick Foles made his second NFL starting quarterback appearance since Week 10 of the 2020 season last week. To argue that he appeared rusty is unfair to all rusty athletes everywhere. He was dreadful, completing only 17 of 29 passes for 143 yards and throwing three interceptions. Seven times, he was sacked as the Colts were crushed by the Chargers, 20-3. What a strange career Foles has experienced before, during and after his improbable rise to lead the Eagles to their first Super Bowl triumph in franchise history after the 2017 season. As a starter, he had a record of 29-28.

»Preview, predictions, and key moments in the Giants-Colts game«