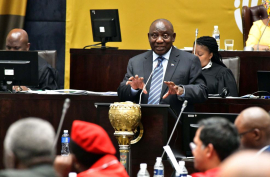 President Cyril Ramaphosa says Eskom announcements are forthcoming, which the government hopes will propel the power utility ahead and strengthen its commitment to overcome the present issues.

The nation has been seized by load shedding because power plants are unable to generate enough electricity to meet the country’s demands owing to a number of factors.

This was disclosed by the President during a question-and-answer session in Cape Town’s National Assembly.

“Load shedding continues to happen to the detriment of our economy, the detriment of our people. Nobody in the country is happy with load shedding, including myself and we are working on it…from cable theft to criminality to the age of our power stations. All that has combined to land us where we are but we are addressing the problem. Everybody is focused on it, the two ministers [Minister of Public Enterprises Pravin Gordhan and Energy Minister Gwede Mantashe] are focused on it including the executives who have been put under tremendous pressure to address this.

“We are going to be making some announcements and we hope and trust and believe that that will then take us forward,” he said.

The President stressed that the present issues confronting the state electricity company were not anticipated, and that the administration has always expected that load shedding would be a thing of the past at this point.

“[Load shedding] has not been the wilful and clearly planned intention of anyone that I work with.

“This has been a calamity of enormous proportions which we all admit. Just two weeks ago, to have almost 50% of our electricity generation capacity just collapsing is not something that was planned by the Minister or the CEO. It is just something that happened and which we are dealing with.

“Almost two months ago when I announced…the broader plan that we have, we obviously did not foresee that we would lose 50% capacity. In fact, what we had wanted to do was to add more capacity and to repair and to maintain a fleet that we have. And yes, admittedly, some mistakes that we have made along the way,” he said.

»President Ramaphosa says announcements are to be made on Eskom«