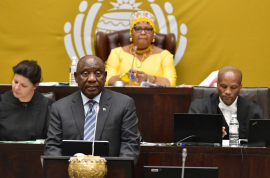 Thursday afternoon, the President responded to questions in the National Assembly.

The game farm has been in the news since June of last year, when former Correctional Services Commissioner Arthur Fraser stated in a public release that a heist occurred there in February 2020.

Fraser said that the President was “concealing the crime,” which the Presidency immediately refuted.

“I have said and admitted that there was a theft at the farm and I have reported that to a General of the South African Police who later informed me that he has reported it to another General of the police. That matter obviously is under processing within the police service [and] they are dealing with it.

“I deny that there was any form of money laundering. I have said…that it was proceeds of game [farming]. I have been a cattle farmer and game farmer for a number of years – a matter that I have disclosed in my disclosures here in Parliament as well as to the secretary of Cabinet.

“That is an activity that sometimes results in the sale of cattle as well as the sale of animals…and that is a matter that takes place from time to time. So that in my view is not money laundering,” he said.

The President said he stands ready to be accountable and assured South Africans that he is cooperating with investigations and due processes related to the matter.

“I have said that I am willing, prepared and able to subject myself to all manner of investigations as well as inquires as well as processes that are unfolding here in Parliament. There is now a Section 89 process…which I have clearly and openly said I will cooperate in and I will cooperate to the fullest of my ability.

“This matter has been subjected to a number of investigations by a number of authorities. The other time I counted up to seven or eight authorities looking into this and I have said that I’m willing to subject myself to that process and that process is now underway.

“My accountability to Parliament will obviously fully culminate in the structure of the Section 89 committee that…members of the National Assembly has set up and that is also where my full cooperation will also be displayed,” he said.