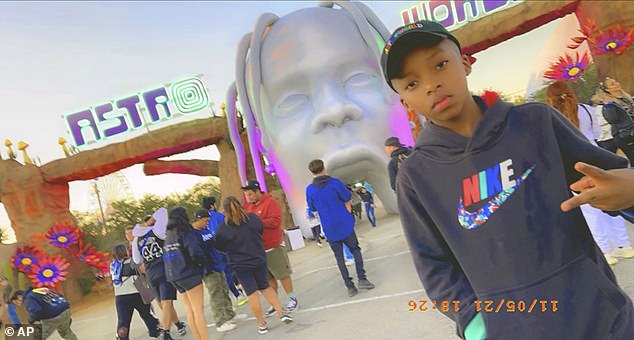 A woman who says she lost her pregnancy as a result of injuries sustained during the Astroworld Festival crowd-crush is suing Travis Scott and the festival organizers for the wrongful death of her unborn baby.

Shanazia Williamson and her husband Jarawd Owens of Dayton, Ohio, say they were expecting a child when they attended the Astroworld Festival on November 5, 2021. They say they lost the fetus due to injuries Williamson sustained at the festival.

10 people were killed during the crowd-crush at the Astroworld music festival in Houston, Texas, last November, and nearly 5,000 say they were injured. Reports say Scott continued performing despite warnings that the crowd was in danger.

‘While in attendance at the festival, Shanazia was trampled and crushed resulting in horrific injuries and ultimately the death of her and Jarawd’s unborn child,’ the suit claims, ‘In addition, Shanazia sustained injuries to her shoulder, back, leg, chest, stomach and other parts of her body.’

‘Defendants’ failure to plan, design, manage, operate, staff, and supervise the event was a direct and proximate cause of Shanazia’s injuries and death of her and Jarawd’s unborn child,’ the suit states.

The suit also alleges the defendants did not provide adequate security or medical personnel, and that they failed to recognize the hazards of the event’s setup.

Attorneys for Williamson and Owens, Jason Itkin and Kurt Arnold, have declined to comment on the suit, according to Rolling Stone, citing a February gag order that limits what attorneys can say publicly about Astroworld lawsuits.

Williamson and Owens’ lawsuit is one of hundreds filed against Scott and companies involved in the festival. Scott, his label Cactus Jack, Live Nation, ScoreMore, Apple, the festival’s security companies, and the venue itself face billions of dollars in damages from people injured at the festival.

A document filed in Harris County, Texas, on Monday showed that over 700 people who are suing over the festival suffered injuries that needed ‘extensive’ medical treatment. More than 4,900 reported they suffered some kind injury at the festival.

Live Nation and the primary security company at the festival, Contemporary Services Corporation, have denied all allegations against them.

Scott himself has continually denied any responsibly for the tragedy at Astroworld.

He performed onstage for the first time since the tragedy at a concert in Miami last weekend. He is scheduled to perform at the Billboard music awards ceremony this Sunday.

A representative for Scott declined to comment when contacted by DailyMail.com.