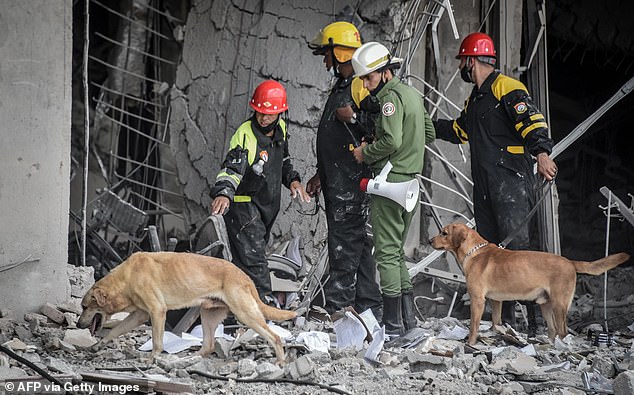 A pregnant woman who was expecting her second child was among at least 35 people who were killed in the alleged gas leak explosion that ripped through an iconic five-star hotel in Cuba on Friday.

The Health Ministry confirmed the death of Yanisleidy Morales Almenteros, 34, as rescue workers with dogs searched through the rubble for people still missing at the Hotel Saratoga in La Habana on Sunday.

Sandra González told Univision that she ran into Morales Almenteros as they were about to leave their homes for work Friday morning.

‘I gave her a kiss. I told her we would see each other in the afternoon,’ she said. ‘She leaves behind a five-year-old child, a boy.’

The ministry announced Monday it had identified three of the four bodies that were recovered during a search that took place before dawn.

Health Ministry also identified 29-year-old Spanish tourist, Cristina López-Cerón Ugarte, among the victims who were killed in the blast just a block away from the Capitol building.

López-Cerón Ugarte and her boyfriend, César Román, 30, were walking near the hotel when the blast destroyed the front entrance’s facade, Spanish newspaper El Correo Gallego reported.

The couple arrived in La Habana on Thursday.

She was declared dead at the scene and Román was rushed to a hospital where he underwent surgery and is listed in critical condition.

The Health Ministry said that 54 people were injured and 24 remain hospitalized.

Authorities are still investigating the cause of the blast at the 96-room hotel owned by Grupo de Turismo Gaviota SA. A large crane was used Saturday to remove the charred gas tanker.

The explosion caused damage to other nearby building, including the historic Marti Theater and the Calvary Baptist Church.

The church said on its Facebook page that the building suffered ‘significant structural damage, with several collapsed or cracked walls and columns (and) the ceiling partially collapsed.’ None of the church work workers were injured.

The Hotel Saratoga has been shut down for two years and was scheduled to open its doors Tuesday.

Some of the victims were buried during the weekend while other families were searching for the missing loved ones and demanding answers from the government.

Angela Acosta told The Associated Press her relatives still haven’t gotten any news regarding Maria de la Concepción Alard, who lived at an apartment next to the hotel.

‘We are hoping that something will be known about my cousins’s mother,’ Acosta said.