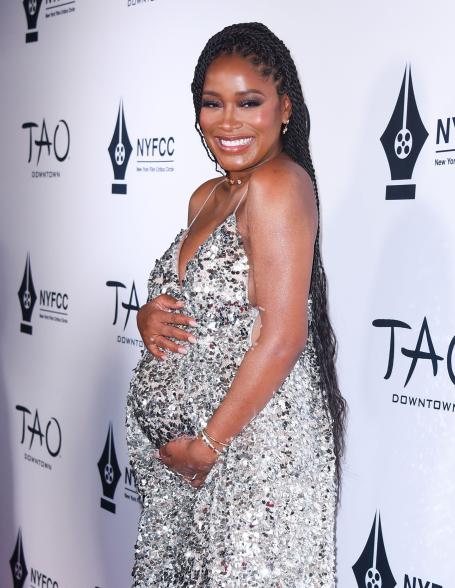 Keke Palmer, who is pregnant, says she “can’t wait” to meet her child.

“I’m very excited, nervous, and curious more than anything because it’s one of those things that no one can really prepare you for,” the “Hustlers” star told Page Six exclusively at the New York Film Critics Circle Awards earlier this week.

“More than anything, I can’t wait to get my hands on my baby,” she continued.

The actress, 28, who is having her first kid with partner, Darius Jackson, confessed that expecting has made her change pace.

She explained, “I’m a naturally fast-paced person.” “My life is moving at least 90 miles per hour, and I’m traveling at that speed. Slowing down is absolutely not something that comes naturally to me, regardless of whether it’s the holidays or a major transformation in my life.

Though Palmer, who was at the ceremony to accept the award for Best Supporting Actress for her performance in “Nope,” has been on our screens since she was a small kid, she stated that she is shocked at her continuing career.

“Time flies it really does shock me when I think about how long I’ve been doing it but I really love it,” the “True Jackson, VP” informed us.

Palmer disclosed to Page Six that she “can’t wait” to meet her child.

Last month, the “Hustlers” actress announced that she was expecting during her opening monologue while hosting “Saturday Night Live.”

The actress and former talk show host confessed that slowing down is not something she does “naturally.”

“There are rumors circulating. People have been commenting ‘Keke is pregnant’ and ‘Keke is having a kid,’ and I want to set the record straight: I am,” she declared on December 3 as she unbuttoned her jacket to display her developing baby bulge.

Since breaking the joyful news, Palmer has kept followers up to date on her pregnancy journey. This past week, she revealed an unanticipated benefit of her pregnancy: it had helped clear up her acne.

“I discovered the key to clearing up my acne, and can you guess what it is? You need to get knocked up. Period. Point blank. Period,” Palmer wrote Wednesday on Instagram.

“The reason my skin is clear right now is because I’m pregnant… The kid has cleaned up my complexion.”

She joked, “I’m about to be pregnant for the rest of my life.”

Palmer and Jackson began dating in 2021 after meeting at a Memorial Day party hosted by Diddy and Issa Rae.

»Pregnant Keke Palmer says she ‘can’t wait’ for her baby«