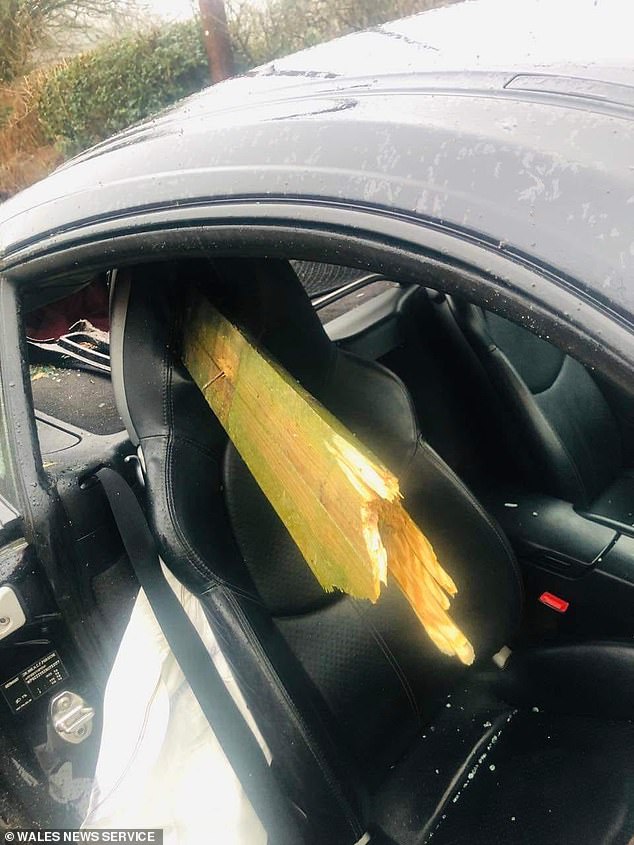 In an incident on a remote road, a Porsche driver nearly escaped death when a fence post punched through his seat only an inch from his head.

When the expensive Boxster sports car lost control and crashed into a fence outside the affluent community of Shirenewton, Monmouthshire, the driver was only inches from being impaled by the fence post.

A jagged fence post protruded through the windscreen, over the steering wheel, and between the driver’s headrest, according to witnesses at the scene.

The driver survived with minor wounds and bruises as a wooden panel almost missed him, while a passenger remained unharmed.

On New Year’s Eve morning, the accident occurred on a rural road, and no other cars were engaged.

The community was ranked in the top 50 most affluent communities in the United Kingdom. However, the Porsche driver’s identity has not been disclosed.

A witness who requested anonymity said that the situation may have been far worse.

He said, “The driver hit the kerb and hedgerow and the fence saved him from entering the adjoining field.”

The vehicle, a Boxster 987 valued over £50,000, was extensively damaged on the front driver’s side and rear, according to him.

“Luckily at the time there was no other road user,” he stated.

The driver escaped with what seemed to be a slight cut above his right ear, while the passenger also escaped with a tiny cut near his left ear.

The driver was less than one inch away from being pierced through the brain, and both he and the passenger were very fortunate.

Gwent Police stated they responded to the location and are conducting an investigation.

»Porsche Boxster driver cheats death after they were nearly killed by a fence post in NYE in Shirenewton, Monmouthshire«