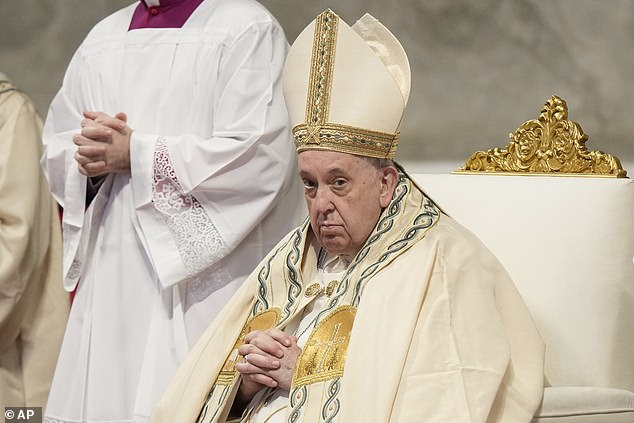 On Sunday, Catholics throughout the United Kingdom will pray for Pope Emeritus Benedict XVI at Mass celebrations, following his death at the age of 95.

Today, Pope Francis led prayers for his late predecessor at a Mass that simultaneously marked the beginning of the New Year at the Vatican.

It follows the Vatican’s announcement that Benedict, the first pope to resign in 600 years, died at 9:34 a.m. on Saturday at the Mater Ecclesiae Monastery in the Vatican.

In a greeting to Pope Francis, King Charles expressed his “great regret” at the death of Pope Benedict XVI. Cardinal Vincent Nichols, the head of the Roman Catholic Church in England and Wales, and Justin Welby, the Archbishop of Canterbury, also paid respect.

Joe Biden, the vice president of the United States, referred to Benedict as a “inspiration to all” and a “known theologian who has devoted his life to the Church, motivated by his convictions and faith.”

Sunday, January 1, 2023, Pope Francis celebrates the solemnity of Saint Mary with a Mass in St. Peter’s Basilica at the Vatican.

A representative of the Catholic Bishops’ Conference of England and Wales stated that Catholics throughout the United Kingdom will pray for Benedict on Sunday.

In 2010, when he visited the Queen and delivered a historic talk at Westminster Hall, Benedict became the second pontiff in history to visit the United Kingdom.

His funeral will take place in St. Peter’s Square, Vatican City, on Thursday at 8.30 a.m. local time, presided over Pope Francis, who succeeded Benedict as pope in 2013.

On Monday, his body will be placed in Saint Peter’s Basilica for visitors to pay tribute.

Sunday, January 1, 2023: Pope Francis arrives at St. Peter’s Basilica in the Vatican to celebrate the solemnity of St. Mary at the beginning of the new year.

On January 1, 2023, Pope Francis arrives to St. Peter’s Basilica at the Vatican to offer Mass in honor of World Day of Peace.

September 2010: Queen Elizabeth II and Pope Benedict XVI exchange gifts in the Morning Drawing Room of the Palace of Holyroodhouse in Edinburgh.

Former pope Benedict, 95, receives the recipients of the “Premio Ratzinger” on December 1, 2022, at the Vatican.

Cardinal Vincent Nichols, the head of the Roman Catholic Church in England and Wales, stated on Saturday that he wants Catholic churches across the United Kingdom to ‘repeat the funeral Mass’ on Thursday with their own rites.

Offering words of consolation to UK Catholics, he continued: ‘We draw strength and comfort from our religion when anyone dies, and whether it’s the pope who dies, it’s the same tale, it’s the same prayers.

“We commend them to God, and we thank God for the many blessings of their lives, particularly his,”

He said, “I was comforted by a phrase I heard in Rome a few days ago, where someone expressed it rather beautifully: ‘The angels are gathering, they’re coming to take him home.'”

In a statement, Charles praised Benedict and recalled his 2009 visit to the Vatican.

I especially recall his efforts to promote peace and goodwill among all people and to enhance the bond between the worldwide Anglican Communion and the Roman Catholic Church.

In November of 2020, Pope Francis (right) will pay Pope Emeritus Benedict XVI a visit at the Vatican.

Cardinal Joseph Ratzinger presents a volume containing documents issued by the Congregation for the Doctrine of the Faith at a press conference held at the Vatican on December 12, 1985. Ratzinger was later elected Pope Benedict XVI.

He served until February 2013, at which time he became the first pope in 600 years to resign, citing his advancing age and failing health.

Mr. Welby referred to Benedict as “one of the best theologians of his era.”

In a statement, he described Benedict as “dedicated to the Church’s faith and steadfast in its defense.”

“I am heartbroken to read of the passing of Pope Emeritus Benedict XVI,” tweeted Prime Minister Rishi Sunak on Twitter.

His 2010 visit to the United Kingdom was a momentous occasion for both Catholics and non-Catholics across the country.

Sir Keir Starmer, leader of the Labour Party, stated that the 2010 state visit was a momentous and wonderful occasion for British Catholics.