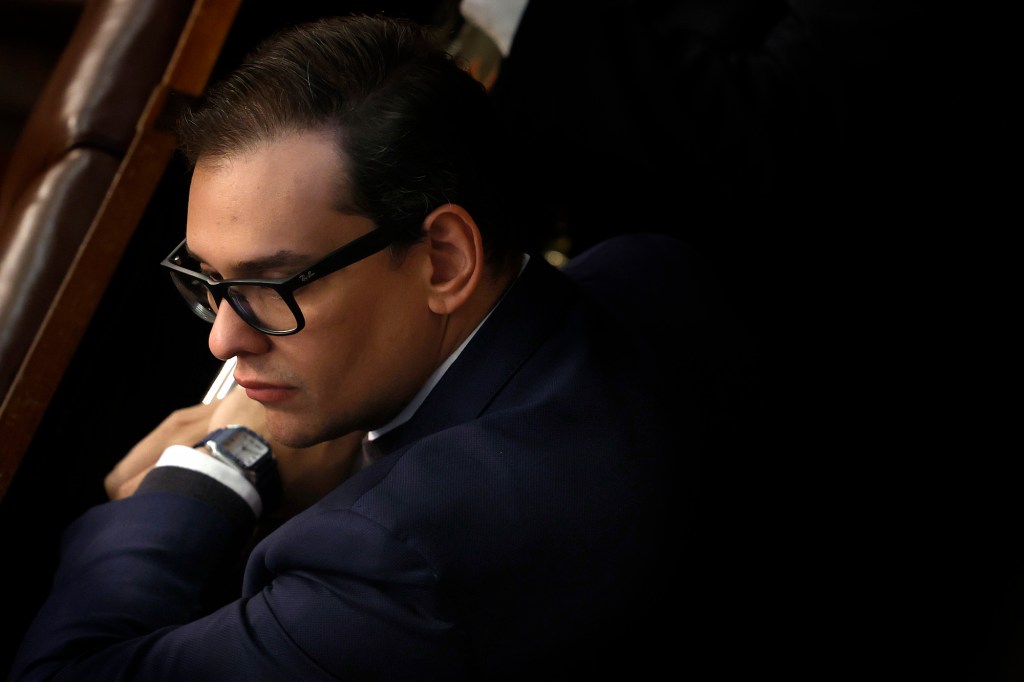 According to a Siena College poll issued on Monday, New Yorkers are heavily in favor of Rep. George Santos (R-Nassau) resigning, particularly residents of the Nassau-based district he is attempting to defend.

71% of suburbanites believe he should step down so that someone else can represent the district that straddles the Queens county line, while only 8% of them have a favorable opinion of Santos – the lowest of any group, tied with seniors, according to a survey of 820 registered voters conducted January 15-19.

According to the poll’s margin of error of 4.3%, the controversial freshman representative, who has stated he would quit if “142,000 voters who voted for me” requested it, does not need to worry about name recognition.

“It is fascinating that Santos went from being a largely unknown freshman representative-elect to being better known to New Yorkers than Brooklyn’s Hakeem Jeffries, who was just elected to his sixth term and is the new U.S. House Minority Leader,” he said.

Greenberg said that other New York politicians barely have to cope with the electoral issues caused by ongoing revelations about the conservative politician’s personal life, which includes bogus Wall Street jobs and allegedly crushed hopes of becoming a Brazilian drag queen.

Greenberg stated, “It must be noted that Jeffries is viewed favorably by 33-20% of the population.”

56% of people approve of Governor Kathy Hochul’s job performance, compared to 36% who disagree – a significant increase from last month, when 49% approved and 44% disapproved.

Many of the voters who elected Santos have asked for his resignation.
Dennis A. Clark Santos, also known as “Kitara,” was a drag queen in Brazil.
Monitoring all of New York Representative George Santos’s lies

In the midst of a politically costly dispute with Democratic state senators over her choice to lead the state’s top court, which was rejected by a Senate panel last week, such numbers were not the only positive news in the survey for the governor.

65% of voters support the notion of providing judges more authority to establish bail for those accused of serious crimes, an idea proposed by Hochul in his State of the State address on January 10, compared to 24% who are opposed to the idea.

76% favor tying minimum wage rises to inflation, while 19% are opposed.

68% support passing an Equal Rights Amendment to the state constitution, while 20% oppose.
61% approve and 29% oppose a “Cap and Invest” proposal to charge large polluters for emissions and invest money in clean energy programs.

However, a majority of 62% opposes the governor’s plan to increase tuition at SUNY colleges, with only 28% in favor.

Greenberg stated, “Strong majorities of voters of all political persuasions support three of her other proposals: guaranteeing state employees up to 12 weeks of paid family leave, basing the minimum wage on the rate of inflation, and giving judges more discretion in setting bail for offenders accused of serious crimes.”

Voters mistrust Hochul’s capacity to achieve many of the goals she listed in her State of the State address, while indicating support for granting courts greater power to jail suspected offenders.

“Parties are also united in their opposition to Hochul’s proposal to allow SUNY schools to raise tuition, although Democrats are less united,” he noted. Despite Republican resistance, two more Hochul measures receive broad support: a majority for CAP and INVEST and a plurality for a state ERA.

On the question of a casino in Manhattan, respondents were evenly divided, 38% to 38%, with 16% wanting more information and 7% having no view. The issue similarly divided voters across partisan, age, and geographic lines.

Voters are mainly pessimistic about her capacity to achieve the goals established in her recent message over the next year as she attempts to recapture political momentum after a rocky start to her newly-won term.

“With the exception of making New York more affordable, which even Democrats do not believe she will achieve, Democrats are optimistic that Hochul will achieve all five goals,” Greenberg added.

“On the other hand, by scores of 46 to 70 percentage points, Republicans assert that she will not achieve any of her objectives. Independents believe Hochul will make progress on job creation but not on any other aim this year, but they are not as pessimistic as Republicans,” he added.