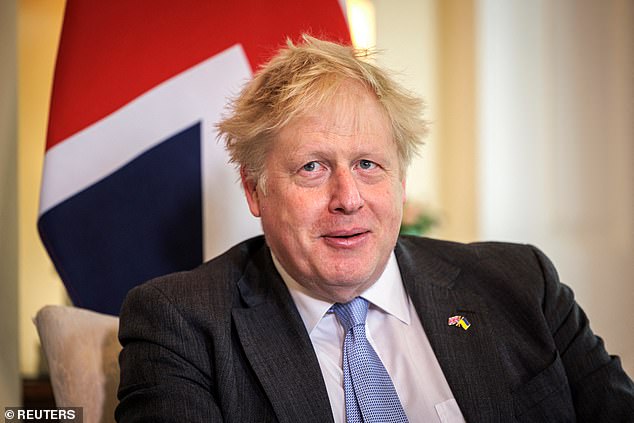 Boris Johnson is trailing Keir Starmer as he faces a week of vital elections – but the absence of an obvious Tory successor could ensure his survival as leader.

That is the conclusion of exclusive research by former Conservative Deputy Chairman Lord Ashcroft, published in today’s Mail on Sunday.

But the 8,000-sample survey also picked up a 55 per cent approval rating for the Prime Minister’s handling of the Ukrainian crisis, with just 25 per cent who disapprove.

Despite the rows still raging about ‘Partygate’, the survey says the cost of living crisis is regarded as the most important issue facing the country, followed by the NHS, the economy, climate change and immigration.

There is no question, however, that the Partygate allegations have damaged the Prime Minister, particularly among voters who switched to the Conservatives from Labour at the last Election – one third think he should resign over the issue.

Lord Ashcroft concludes that there are three reasons why ‘Boris and his party have a path to survival’. First, many of those who objected to Party-gate said it would not stop them voting Tory; second, there’s the lack of a Tory rival with the potential to turn around the party’s fortunes; and third, Sir Keir ‘has yet to take the nation by storm’.

The survey also found ‘very little enthusiasm for Labour… even among those… highly critical of Johnson and the Conservatives. There were concerns that Labour could not be trusted with the public finances, and Starmer himself was widely thought to be criticising the Government without offering any constructive alternatives.’

One focus group attendee said: ‘He’s a non-entity really. All he does is bitch about what everybody’s doing wrong, but he’s not telling us what he’ll do.’ Another said: ‘There’s no kind of solution coming out of his mouth.’

But voters did praise the woman of the moment: Labour’s Deputy Leader Angela Rayner.

According to one participant: ‘We need someone like Angela Rayner – comes from a mining village, was a carer for years. She’s got that passion to try and make a difference.’

Another commented: She doesn’t seem like a politician. She just seems like the woman who lives across the street and goes on a rant and a rave.’