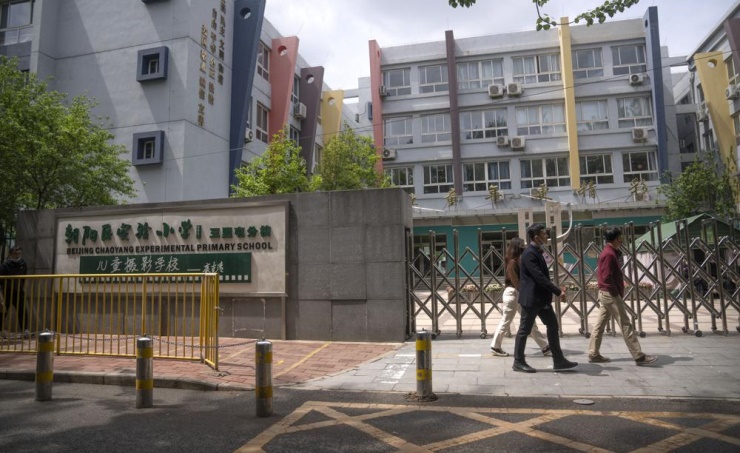 Beijing, Apr. 29 (BNA): Classes suspended. Buildings and communities sealed off. Mass testing of residents. A rush to stock up on food, just in case, the Associated Press (AP) reported.

Beijing, China’s sprawling capital, is starting to resemble other Chinese cities grappling with the latest wave of the omicron variant of the coronavirus.

Authorities are moving quickly to try to prevent a massive COVID-19 outbreak that could trigger a citywide lockdown like the one that has paralyzed Shanghai for more than three weeks. The political stakes are high as the ruling Communist Party prepares for a major congress this fall at which President Xi Jinping is seeking a third five-year term to reassert his position as China’s unquestioned leader.

Xi and the party’s main policymaking body, the Politburo, reaffirmed their commitment to a “zero-COVID” policy on Friday, putting China at odds with much of the world. While many countries are dropping restrictions and trying to live with the virus, China is keeping its international borders largely shut and closing off entire cities to all but essential travel.

The Politburo acknowledged the economic cost of lockdowns, saying efforts must be made to “minimize the impact of the epidemic on economic and social development,” the official Xinhua News Agency reported.

Despite the toll on the economy and everyday life, the zero-COVID approach is extolled by the Communist Party as a virtuous display of self-sacrifice under the slogan “Persistence is victory.” Officials frequently point out China’s relatively low death toll and have accused the U.S. and other countries of essentially giving up.

“If the COVID response loosens to let the virus run free, it will definitely lead to a huge number of infections in a short period of time and a large number of severe and mortal cases,” Li said at a media briefing Friday.

Shanghai reported 52 more deaths on Thursday, bringing the toll to 337 in its ongoing outbreak. Liang Wannian, the head of China’s COVID-19 expert team, told the briefing there have been signs of improvement in Shanghai, but the situation remains serious. The city recorded about 15,000 cases on Thursday, accounting for the vast majority nationwide.

Beijing’s strategy of early testing and isolation appears to be working so far. About 200 cases and no deaths have been reported since the outbreak started a week ago, though the daily number of new cases has creeped up to nearly 50.

“I think Beijing can do better than other cities because Beijing is the capital city of China,” said community worker Liu Xuan. “And my work is related to virus control and prevention so I feel confident.”

A botched response to the Beijing outbreak may not impact Xi’s plans for a third term, but it could dent the party’s reputation and with it, Xi’s room for maneuver on issues such as personnel appointments, experts said.

“Even if Xi Jinping himself is untouchable, a widespread sense of failure and disappointment is bad for a congress year,” said Joseph Torigian, a Chinese politics expert at American University in Washington, D.C.

The pomp and circumstance in the run-up and during the meeting would contrast with the frustration, he said.

Liang, the COVID-19 expert team head, said citywide lockdowns can be avoided if early detection, reporting, isolation and treatment are done well. “Fighting omicron … does not necessarily mean locking down the entire city,” he said.

What remains unclear is whether the highly contagious variant will breach Beijing’s defenses, and whether containment measures will be enforced in a way that minimizes disruption to daily life and the work of government and businesses.

Beijing is taking no chances. The government ordered the indefinite closure of schools and three rounds of testing of virtually all the capital’s 21 million residents this week. When cases are uncovered, entire buildings and sometime neighborhoods are locked down.

Residents have generally complied with the demands, joining long lines for testing and food, some stretching outside supermarkets this week.

The cautionary tale for Beijing is Shanghai, China’s largest city, where millions of residents have been under a lockdown for more than three weeks. Food has run low at times and heavy-handed enforcement and a lack of preparation have prompted heavy criticism, despite government efforts to censor it.

Images online have shown residents grappling with police and confronting health workers, kicking at barriers, screaming off their balconies and banging pots and pans to show their frustration.

The lockdown has dealt a blow to the economy at a time when growth was already slowing. The International Monetary Fund has reduced its forecast of Chinese growth this year to 4.4% because of the shutdowns of Shanghai and other industrial centers. That would be down from 8.1% growth last year and below the Communist Party’s 5.5% target.

Liang said the short-term pain would be exchanged for long-term returns to normal production, life and economic development. “I think this is cost-effective and is also a kind of balance,” Liang said.

“Inconvenience to people’s life or economic impact is the pain we have to suffer and a price we have to pay,” Yu said. “But if we fail to prevent the spread of the virus, we will suffer heavier losses with larger and broader social and economic impact.”

Any shortcomings in the government’s response could inspire the citizenry to take matters into their own hands, eroding party control, said June Teufel Dreyer, a Chinese politics specialist at the University of Miami.

Shanghai fell short in areas such as distribution of food and medicine and provisions for the elderly and pets. In response, residents banded together in ad hoc groups to provide relief, a development that the party may have found disturbing,

“Will the party-government be able to reimpose control once the feeling of crisis abates? I don’t think they’ll find it too easy to do so,” Dreyer said.