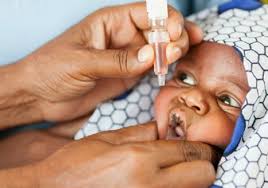 The Edo State Primary Health Care Development Agency has announced the rescheduling of the second round of oral polio vaccination for children between the ages of 0 to 59 months which was earlier slated for May 7, would now hold between May 14 and May 17, 2022.

The postponement was announced by the Health Education Officer of the ESPHCDA, Mrs. Irene Uabor,  in a statement in Benin on Wednesday.

It said, “This is to inform the general public that the second round of oral polio vaccination for children between the age group of 0-59 months, that is, less than five years of age, earlier scheduled for May 7, will now hold between May 14 and May 17.”

The health official noted that the exercise would be conducted in all the 18 Local Government Areas of the State.
She said health personnel in the state would be positioned at designated points such as churches, mosques and markets to administer the oral polio vaccines.

She also noted that the rising cases of poliovirus across the state had necessitated the vaccination campaign.
The health official, therefore, sensitised parents and guardians to the development, urging them to comply with the prescribed health guidelines that would be issued by the health personnel to carry out the immunisation exercise.
MTO/Punch