Skip to content
Go Home «» News «» World News «» Police: Woman who claims she was arrested for being “too good-looking” admits to murdering her mum 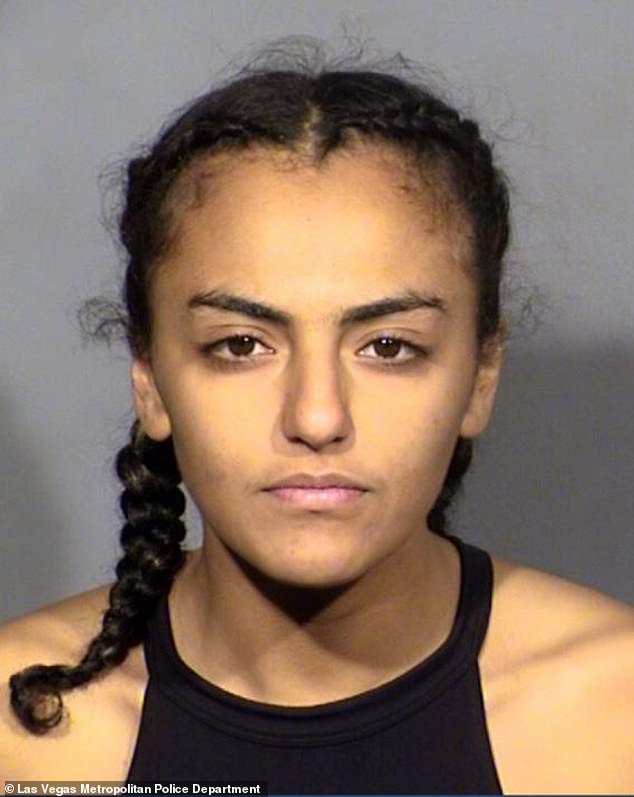 KLAS obtained a 911 call in which a Nevada lady informed the dispatcher that she had murdered her mother by severing her neck.

Hend Bustami, age 28, of Las Vegas, called police around 2:30 a.m. on October 26 and calmly detailed how she murdered her mother, Afaf Hussainen, age 61.

Bustami, who garnered attention in August when she accused authorities of arresting her because she was too attractive when being arrested for shoplifting, is now accused of brutally murdering her mother.

The newly discovered audio begins with a dispatcher asking the woman why she is calling and what type of assistance she requires.

“Do you require police, fire, or medical assistance?” says the 911 dispatcher to the Las Vegas woman.

She says, “Well, medical” I believe I murdered my mother.

Bustami provides the dispatcher with her mother’s address before to being questioned why she believes she ‘killed her mother.’

‘Because I did. I murdered her,’ responds Bustami.

How did you accomplish that? asks the dispatcher.

“I smashed the table on her head,” the lady declares.

Then, Bustami informs the dispatcher that she is still at her mother’s residence, confirming the address once more.

The dispatcher then inquires, “Okay, so what did you do to her?”

The dispatcher inquires, “How did you murder her, since you mentioned a table?”

I shattered the table over her head. I smashed the table on her head and severed her neck,’ recounts Bustami.

“You cut what?” asks the dispatcher.

“Sever her neck,” the lady responds.

The California Highway Patrol discovered Bustami driving on Interstate 15 near Barstow at 5 a.m., covered in blood.

She reportedly told authorities that she had gotten into a fight with her mother and stabbed her with a glass shard, according to 8 News Now, which read the report.

In August, Bustami made headlines after she was arrested at the Harry Reid Airport in Las Vegas for attempting to skip out on a Chili’s bill.

The woman was apparently inebriated and belligerent, and when she was being arrested, she reportedly claimed she was being harassed.

On August 31, she was booked for misbehavior.

The LVMPD received a tip that Bustami walked out on a tab at the Chili’s restaurant within the airport, and officers found her to be “belligerent” after she slowed down operations at the airport’s security checkpoint.

Bustami allegedly threatened to spit on the officers as she dubbed them “perverts” and claimed they were “attempting to rape her since they had never seen somebody this attractive.”

According to 8 News Now, she was also charged with violence in June in Las Vegas, when she was booked into the Clark County jail before being released.

8NewsNow stated that police were called to the family home at least 12 times this year alone, seven times for ‘family disturbances’ and once for a suicide attempt.

Andres Moreno, a neighbor, told the network that the family’s residence was the noisiest on the block.

‘Usually around 10 p.m., they were simply yelling or fighting in the backyard,’ he claimed.

‘Typically, the oldest daughter and the mother would get into an argument. Obviously, quickly after yelling, police presence would intervene and the situation would, you know, calm down. Then, one week later, it would occur again.’

He claimed that Bustami was frequently observed acting’strangely’ in the neighborhood, requesting rides from strangers, entering neighbors’ open garages, and spreading her stuff over the neighborhood.

Moreno told 8NewsNow, “She would come outside and practically spin in her driveway, singing songs or talking to herself, or she would just go up and down the neighborhood muttering to herself.”

I feel that she had mental health difficulties and that she sorely needed treatment but decided not to receive it. Or, you know, who am I to say, but something was clearly going on with her.’

According to her LinkedIn profile, Bustami is a graduate of the University of Nevada-Las Vegas with a degree in Hospitality Administration and Management.

»Police: Woman who claims she was arrested for being “too good-looking” admits to murdering her mum«