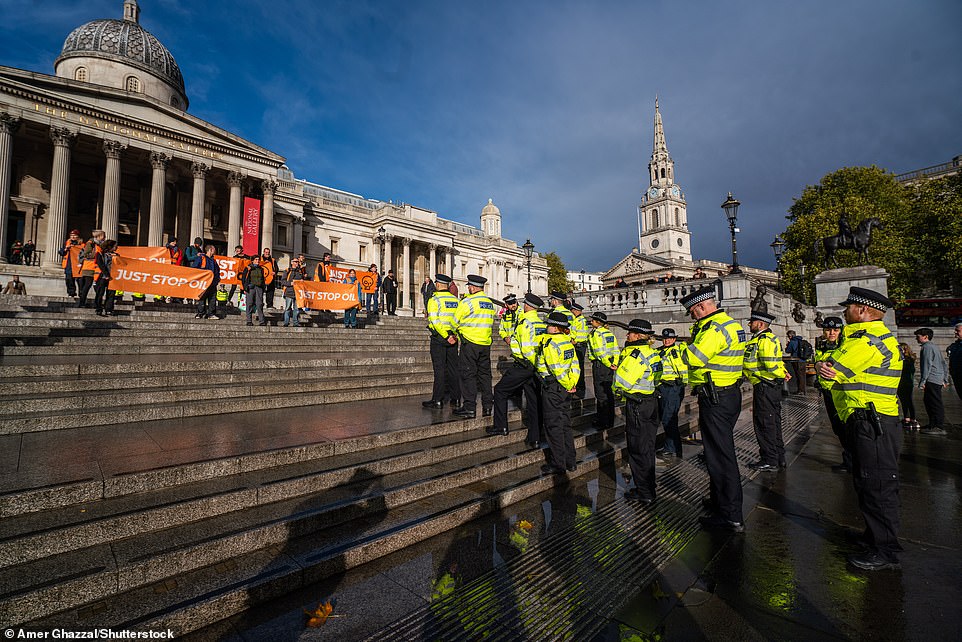 Despite the fact that their month-long protest has come to an end, Just Stop Oil activists have returned to central London’s streets.

While some eco-group protesters have been observed being halted by police near Downing Street, others are presently trying to block Whitehall, close to the Cenotaph.

It follows the conclusion of the group’s month-long protest, making today’s demonstration day 32.

In order to persuade the government to cease approving new oil and gas sites, the eco-warriors had pledged to take part in demonstrations every day in October.

Yesterday, members from the organisation vandalized the front of the Home Office’s offices with yellow paint.

It follows yesterday’s incident in which a bystander disobeyed police orders to refrain from “actively intervening” with a Just Stop Oil campaigner.

An angry bystander was spotted attacking a protester as they used a fire extinguisher to spray orange paint all over a structure.

The moment they showered the front of the MI5 headquarters on Millbank in Westminster with paint and fought for control of the contraption with the climate activist was caught on camera.

Tez Burns, a 34-year-old Swansea bicycle mechanic, was heard in an expletive-filled conversation with a passer-by this morning stating, “I don’t want to do this,” but he also added that their “basic” demand was for “no new fossil fuel permits.”

Burns said after the event, “The government has seized our future, and I want our future back.” It is unlawful inactivity.

The government is non-existent. How does it work? It grants fresh permits for the use of fossil fuels and declares that we must extract every last drop of oil from the North Sea.

“That contradicts everything that all of these very renowned organizations are teaching us,” one person said.

Here I am, a regular person, having to do this, they continued. You believe I like it? No, I believe that doing this is my responsibility as a citizen of the UK, especially in light of the fact that our government is corrupt. I’m in shock. I’m enraged.

It happens despite police asking the public to contact them last week to deal with eco-protesters instead of handling things themselves.

Using fire extinguishers to remove paint off the Home Office and MI5 building, the Bank of England on Threadneedle Street in the City of London, and the News Corp headquarters at London Bridge, six eco-activists have so far been detained for criminal damage.

Government, security, finance, and the media are said to be the four pillars that uphold and preserve the dominance of the fossil fuel economy, and one of those pillars is represented by the MI5 building.

A few hours later, protesters squatted in the center of Victoria Street in front of the Department of Business, Energy, and Industrial Strategy (BEIS).

The road was shortly reopened after three persons were hauled into custody at a police station in the heart of London and detained on suspicion of obstructing the traffic.

As part of its demand that the government freeze all new oil and gas licenses and consents, the green group organized 31 days of demonstrations in London and the south-east of England.