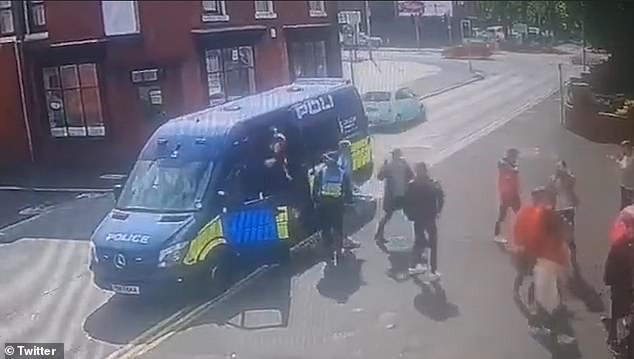 Police are investigating a team of officers who ‘gave 26 Middlesbrough football fans a lift to the pub in their riot van’.

Lancashire authorities have launched a probe after a video emerged showing a stream of Middlesbrough supporters exiting a marked Mercedes Sprinter van on Saturday 7 May.

Two separate videos were taken by a fan inside the vehicle showing the extremely cramped conditions, whilst another was recorded outside a pub via CCTV shows the fans spilling out of the van.

One fan remarked the police vehicle appeared to be ‘a Tardis’ as 26 supporters – with one carrying a large inflatable pink elephant – tumbled out.

The footage, which has over one millions views, was posted to social media following Middlesbrough’s clash with Preston on Saturday for the final Championship match of the season.

There were allegedly three police officers in the van, taking the total number on board to 29 people and one inflatable elephant. It is unclear why the alleged lift took place.

Wayne Summers said: ‘Is that a comedy sketch? They just keep on coming out of the van.’

Another fan quipped: ‘Did they borrow that van from the circus?’

One Twitter user added: ‘Preston one of the best away days in the country. Sound people and sound coppers.’

One more Middlesbrough fan said: ‘Great atmosphere, great policing. Everything made for a superb away trip apart from the result.’

However, there were some fans that were concerned over the amount of people that were in the back of the van. One person added: ’26??!!! Surely that’s past the legal limit for that vehicle??’

Another person responded: ‘Sure that’s three points on the driver’s license. Unsafe/unsecure load.’