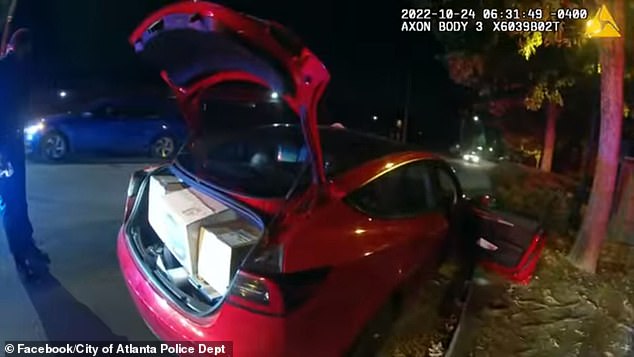 Two thieves were apprehended by Atlanta police in a red Tesla containing dozens of stolen Amazon shipments and various drugs.

Larry Byer, 39, and Don’El Leon Hammonds, 38, were apprehended early on Monday morning after someone called 911 to report a burglary at a company in the 900 block of Huff Road.

Two males were seen stealing things from the premises and loading them into a red Tesla, according to the caller.

A representative for the Atlanta Police Department commented on Facebook, “Some say we shouldn’t judge a book by its cover; we say, don’t judge a thief by the automobile they drive.”

Two males matching the description and wearing gloves were with the vehicle.

When officers searched the vehicle, they discovered a variety of substances, including marijuana and meth, a weapon, and credit cards and identification cards bearing the names of several people.

Officers restored the package to its rightful owners.

According to a report, both males are still in custody at the Fulton County jail.