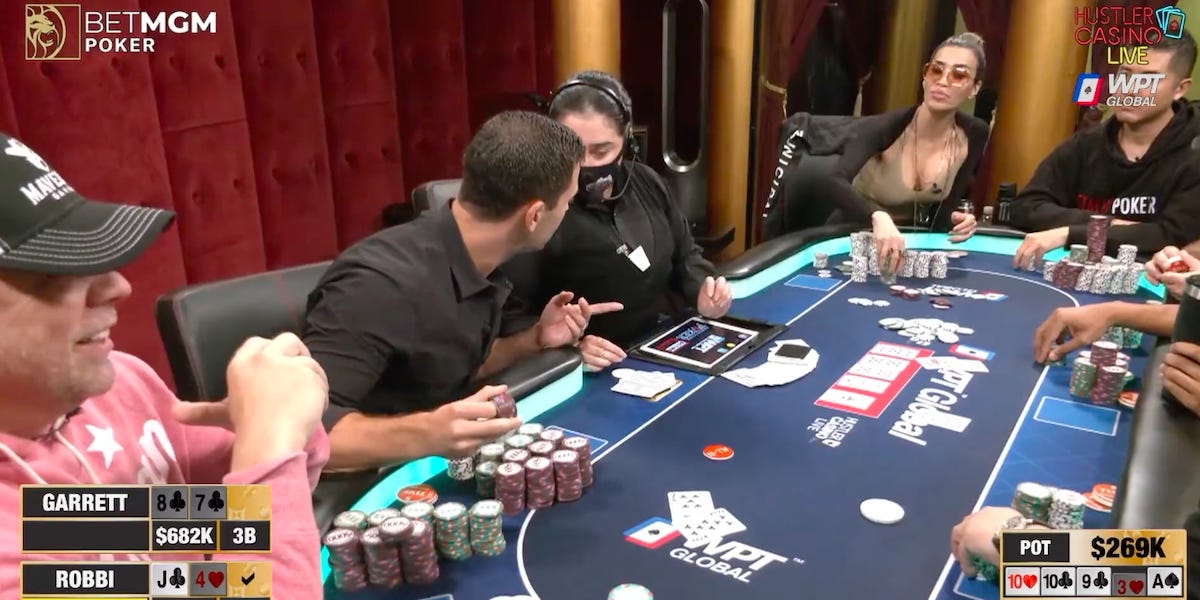 The poker community is divided over Garrett Adelstein’s accusations of cheating during a no-limit Texas Hold’em game with Robbi Lew on Hustler Casino Live (HCL).

Prior to an impartial examination of a cheating allegation, prominent players in the game, like Doug Polk and Daniel Negreanu, have provided opposing viewpoints.

Chris Brewer tweeted at the time that there is a “0% chance [the] hand is genuine,” despite having earned more than $6 million in tournament winnings, according to the database Hendon Mob.

Adelstein “was cheated,” according to Brewer, who said, “The only issue left is how.”

Others, though, believe that it is more likely that Lew just made a move that defied accepted poker ideas.

Brian Koppelman, a screenwriter and novelist best known for creating the television series Billions and the 1998 poker film Rounders, saw the hand twice and noted that Lew “seemed sorry to have made a lousy move.”

Adelstein argues that he has been defrauded. Lew insists that she is innocent.

With the seven and eight of clubs on a board with the nine and ten of clubs on the flop, Adelstein had a ton of outs.

He semi-bluffed-shoved all-in when Lew min-raised his original $10,000 bet with a $20,000 bet of her own when an ineffective three of hearts came on the turn.

Lew shocked HCL commentator Bart Hanson by betting her whole stack in order to increase the pot’s value to $269,000 while holding just a jack high.

Adelstein was aware that eight high was probably no good and that he had lost the pot despite their agreement to run the river twice since neither card enhanced his hand.

However, Adelstein was shocked when Lew turned her cards to reveal jack high, demanded out loud what was going on, and afterwards claimed on Twitter that he had been “obviously duped.”

Lew has insisted that she is innocent and has even asked that the two of them play a game of heads-up poker, which Adelstein seemed to agree.

Both players will not be welcomed back to the program until an independent inquiry, which may include the use of a polygraph test, has been completed, HCL said in its own statement. It said that the results will be made public.

“The most erratic hand of all time”

The hand itself and the unusual charge continue to generate the most discussion in poker.

The event is “certainly in the argument for the most out-of-control hand of all time,” high stakes poker player and prominent poker video maker Doug Polk said on his YouTube channel.

Polk later said in a video analysis that he had 90% confidence Lew was cheating.

According to one of poker’s ambassadors, Adelstein could choose to play the game differently if he had the chance.

Daniel Negreanu, a six-time World Series of Poker bracelet winner with $46 million in tournament winnings, said in a podcast posted on his YouTube channel that Adelstein would probably want to review his response to the circumstance.

“You can see him in the video asking, “Guys, are you seeing what I’m seeing here?” as he glances over at Phil, Andy, and the other professionals. Is this an issue?”

“Now, if he could go back I would imagine the play would be to just get up from the table, talk to the guys behind the thing, and say, ‘Guys, I’m 99.9% sure she’s cheating so we need somebody to go take a look in her pockets, do something.’ Rather than do it in the way that he did. What if she didn’t cheat, and that’s just happened to her? She’s been defamed … In poker, it’s really irresponsible to make claims that people are definitely cheating if you don’t have the receipts to prove it.”

Lew’s poker mentor Faraz Jaka, who has earned more than $10 million in tournament victories, tweeted on Saturday that he had “no reason to assume anything dodgy was going on” in the hand against Adelstein based on the way Lew speaks and plays cards in their sessions.

Until the findings of Hustler Casino Live’s inquiry are made public, the debate is unlikely to end.

The bizarre and crazy hand will undoubtedly continue to be discussed in the poker world up to that point.