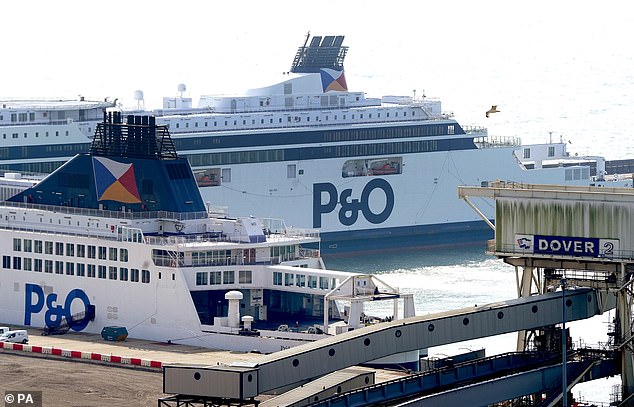 The disgraced P&O Ferries have been accused of trying to pay its new low-paid foreign crew even lower wages.

The ferry company drew national outage last month when they illegally fired nearly 800 staff members without notice over Zoom and replaced them all immediately with cheaper foreign workers.

The agency workers who were hired to replace 786 staff say they were asked to sign new contracts on even lower pay.

It is claimed that if they refused to agree they faced being out of work and one agency worker emailed the National Union of Rail, Maritime and Transport Workers (RMT) , declaring: ‘We are desperate.’

The ‘desperate’ agency worker is from the Spirit of Britain ferry, which until Friday had been detained in order to fix ‘a number of’ safety issues.

The 700ft long ship is now commencing operations, though the Pride Of Kent vessel,  which also runs along Dover-Calais crossing, is still detained.

The detentions of both ships caused a shortage of ferry capacity in the run-up to Easter on the key Dover-Calais crossing and sparked massive queues of lorries on coastbound roads in Kent.

In one example reported by The Mirror, workers say chefs paid £2,336 a month on temporary contracts were asked to sign new deals giving them £195 a month less.

Although it is not known who faced a cut in wages, or if staff on seven other ferries were targeted too.

Darren Procter, national secretary of the RMT says some of the new workers were brought in on just a month’s contract, and when those contracts expired the staff were offered ‘inferior terms’.

The RMT are campaigning for dismissed P&O staff to be reinstated, but ‘irrespective of nationality’ are concerned for the new staff members, Mr Procter added: ‘they are just as much victims as our members.’

The new crew was hired through Malta-based International Ferry Management, which was only set up in February.

Shipping firms registered abroad and running routes from the UK to Europe are exempt from minimum pay legislation.

In the email seen by the Sunday Mirror, a Romanian chef claimed IFM and P&O were trying to make agency crew sign new contracts.

He said: ‘They don’t care about rights. This is my sixth day working without contract, please help us. They try to give us less money. We are desperate.’

‘As part of the re-inspection the MCA investigated and as a result the affected seafarers were issued with amended contracts, which reverted to their original wages.’

The RMT was allowed to board the ship last week and speak to crew.

Mr Procter said: ‘I spoke with three Honduran crew and explained they only have 50 minutes in port and will not set foot on dry land for shore leave for 17 weeks – as there is no time to do so. The colour drained from their faces and I think they realised they were joining a ferry and not a P&O cruise ship!

‘Their contract is basic pay of $961 per month for 40 hours work per week. This equates to £748 per month on board a vessel, away from loved ones on the most intensive ferry route in UK.’

Mr Lansdown, of Herne Bay, Kent, who is suing for unfair dismissal, said: ‘P&O are exploiting workers. If they get away with it again it could give the green light to others.’

P&O has said the sackings came after £100million-a-year losses jeopardised all 3,000 staff. The company, which refused to comment yesterday, was bought back for £322milion in 2019 by Dubai-based DP World, which first owned it in 2006.

It comes as several P&O Ferries agency staff were fired after testing positive for alcohol when they turned up for work.

Seven of the new workers, who were employed to replace permanent staff dismissed by the firm last month, were relieved of their duties after breaching guidelines on alcohol consumption. The agency staff returned to work on board a ferry over the limit, after leaving the ship for shore leave.

They were dismissed with immediate effect by P&O, which has a zero-tolerance policy on alcohol.