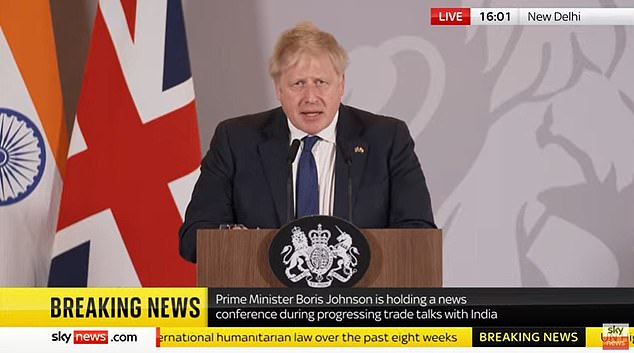 Boris Johnson is facing the prospect of another Partygate fine following reports that police today began issuing Fixed Penalty Notices to attendees of a ‘bring your own booze’ event in the Downing Street garden.

The Prime Minister, who has already paid a £50 FPN over a 56th birthday bash in Number 10 in June 2020, could also now have to stump up over the ‘BYOB’ event a month earlier.

Mr Johnson has previously admitted attending the gathering in the Downing Street garden at the height of the UK’s first national lockdown, although he has said he believed it to be a ‘work event’.

He told MPs in January that the Downing Street garden had been used ‘as an extension of the office’ during the Covid crisis ‘because of the role of fresh air in stopping the virus’.

If the Metropolitan Police do not agree with the PM’s assessment of the event – and decide he did breach Covid rules by attending – then Mr Johnson is set to receive a second FPN.

A leaked email revealed how, on 20 May 2020, one of the PM’s chief aides invited Number 10 officials to the event to enjoy the spring sunshine in the Downing Street garden that evening.

The PM subsequently admitted to attending the gathering with ‘groups of staff’ for 25 minutes.

Martin Reynolds, the PM’s former principal private secretary, left Number 10 earlier this year following the revelation he had sent the invite to the ‘BYOB’ event.

This had earned him the nickname ‘Party Marty’.

His email invite was said to have been sent to more than 100 employees in No10, including the PM’s advisers, speechwriters and door staff.

Mr Reynolds invited to staff to gather in the Downing Street garden to ‘make the most of the lovely weather’ with ‘some socially distanced drinks’.

Around 40 attendees were said to have gathered in the garden that evening to eat picnic food and drink.

Mr Johnson’s wife, Carrie Johnson, who has also already received a police fine over the PM’s 56th birthday event, was also among the alleged attendees on 20 May.

If the PM is fined again by the Metropolitan Police as part of their Operation Hillman investigation into Partygate, his second fine is likely to be £200.

In England, people aged over 18 can be fined £100 for a first offence of breaching COVID rules, which is lowered to £50 if paid within 14 days.

A £200 fine is issued for a second offence, which doubles for each further offence up to a maximum of £6,400 per offence.

After it emerged that Scotland Yard had begun to issue FPNs over the 20 May event, Liberal Democrat leader Sir Ed Davey said: ‘Boris Johnson must immediately declare if he is given another fine. No more cover-ups, no more lies.’

Scotland Yard this week said they would not provide any more updates on new FPNs related to Partygate until after next month’s local elections.

However, Downing Street indicated that they would still say if Mr Johnson was to receive a further fine.

The PM today ended his two-day visit to India and is due to arrive back in the UK tomorrow.

A second police fine would further imperil Mr Johnson’s chances of surviving the Partygate scandal and remaining in Number 10.

But a defiant PM earlier today insisted that he would still be in power in October, although he tried to avoid a further public grilling over Coronavirus law-breaking in Downing Street.

Mr Johnson’s press conference in New Delhi, that should have focused on his hopes for a new trade deal with India, was overshadowed by the crisis unfolding 4,000 miles away in Britain.

The PM tried to see off questions about his future in No10, suggesting reporters had already had enough of a go at him about it yesterday.

‘We had a pretty good kick of the cat yesterday, ‘ he told bemused journalists.

‘Not that I’m in favour of kicking cats, for the avoidance of all doubt.’

When it was pointed out that the UK public was interested in the issue, he said: ‘I think that what people want in our country is for the Government to get on and focus on the issues on which we were elected, and that’s what we’re going to do.

‘I think they’ll be particularly interested in jobs, growth in the UK – a memorandum of understanding for instance, today, on wind power, gigantic ambitions for more and more wind energy, both of us, not just offshore wind but floating platforms.’

He used the appearance to repeat his hopes of having an Indian free trade deal done by Diwali in October. And asked whether he would still be PM when it was signed, he said: ‘Yes.’

The Prime Minister last night bowed to a revolt in the Commons yesterday and dropped his attempt to delay yet another investigation into the lockdown lawbreaking crisis.

The Committee of Privileges will consider whether the Prime Minister knowingly misled the House over lockdown-busting gatherings.

If it finds him in contempt of Parliament, it could recommend that he is forced to apologise, suspended from the Commons, or even expelled.

No10 was forced to climb down after around half a dozen ministerial aides indicated they were prepared to resign to support the Labour plan for a fresh inquiry.

The report is not due to report back until a sperate police probe in completed, most likely in the autumn.

But there are fears bombshell photographs of the PM attending parties in Downing Street – including with drinks in his hand – could be made public.

One of his closest allies, Northern Ireland Minister Conor Burns, this morning turned on Tory critics of the PM, saying: ‘If the Prime Minister stepped off Westminster Bridge and walked on top of the water they would say he couldn’t swim.’