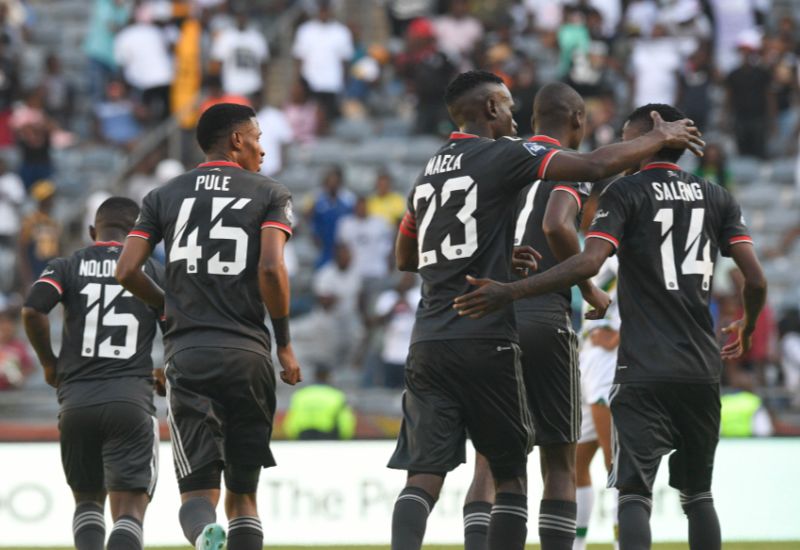 The Buccaneers had not collected a league point since the hiatus and hoped a return to their home turf would improve their luck, while their opponents were eager to build on a hard-fought victory in their most recent trip.

However, the very first action of the game nearly ended in a goal for the visitors, as a botched ball in the middle of the field led to Knox Mutizwa bursting free and taking a shot that was brilliantly blocked by Bucs goalkeeper Sipho Chaine.

In the first 15 minutes, the home team had only half-chances.

Kermit Erasmus was put in a one-on-one situation with Arrows goalkeeper Sifiso Mlungwana 21 minutes into the match. Mlungwana made a critical save to deny Erasmus’ shot.

Seven minutes later, the deadlock was broken by Bandile Shandu’s superb effort on the right wing. He sneaked behind the defense before delivering a brilliant low cross to an onrushing Monnapule Saleng, who scored his sixth goal in all competitions this season.

In the 34th minute, Pirates had a chance to double their lead when Deon Hotto’s corner kick found Thabang Monare at the far post, but the Bucs midfielder’s header went agonizingly wide.

The Buccaneers’ opportunities dried up towards the end of the first quarter, but the opposition posed no threat as they entered the locker room with the lead intact.

The second half began similarly to the first, with Pirates gaining an early opportunity as Hotto played in Saleng, who was unable to keep his shot from in front of the goal posts.

The Namibian international and halftime substitute Ndabayithethwa Ndlondlo had subsequent opportunities, but neither could alter the scoreboard.

Velemseni Ndwandwe found a way through Chaine’s defenses to equalize for Arrows shortly after the hour mark, making the squandered opportunities costly.

The Bucs’ center-back duo of Nkosinathi Sibisi and Tapelo Xoki were forced to work overtime as the visitors continued to launch wave after wave of attacks into Bucs territory with their tails up.

And the final whistle approached, Pirates regained their composure as Ndlondlo came close to regaining the lead directly from a corner when Mlungwana punched away his in-swinging ball.

They continued to press and were rewarded in stoppage time when Saleng’s cross found Terrence Dzvukamanja, whose powerful header put the score 2-1.

The Buccaneers were not finished, as seconds later, Vincent Pule broke through the center and deftly placed the ball beyond Mlungwana to put the outcome beyond question.

On their return to their home field, the Soweto Giants secured their first points of the new year, preventing the Durbanites from mounting a comeback.