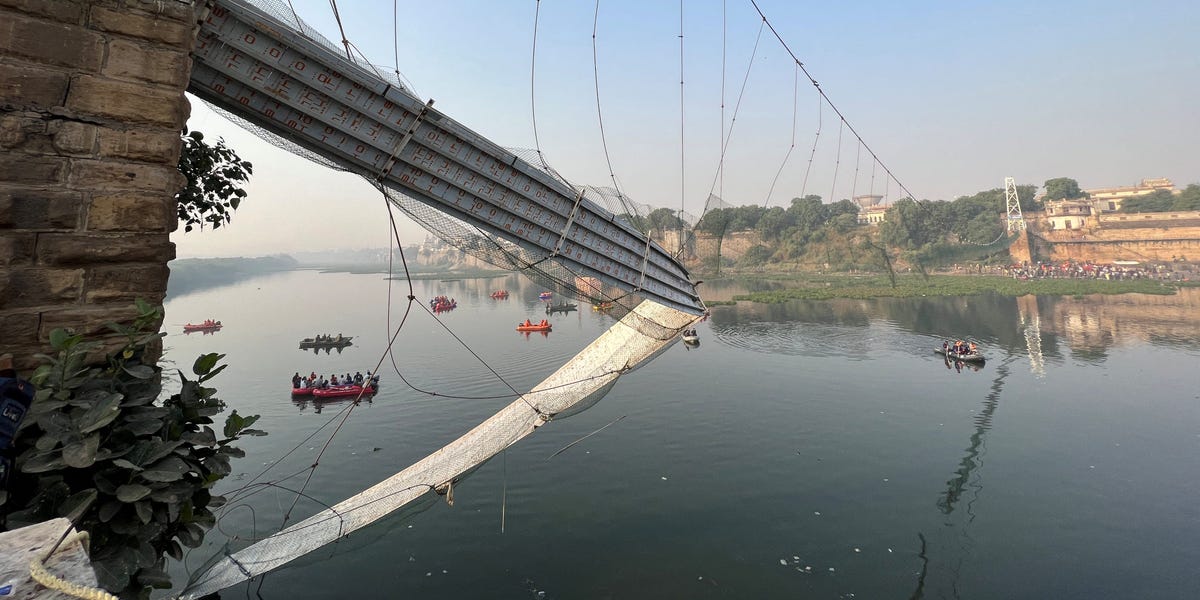 Sunday, at least 132 people were murdered when a suspension bridge in Gujarat, western India, collapsed, local government authorities said Reuters. Local authorities continue to search for survivors after more than 400 individuals fell into the river below.

“The number of fatalities caused by the bridge collapse has risen to 132. The continued search and rescue activities “Monday, top official NK Muchhar told the wire service. The death toll is expected to climb, he noted.

A video aired by the local news station News24 depicted the precise moment the footbridge collapsed into the Macchu River as hundreds of Hindus celebrated Diwali. The footage depicted individuals smiling and conversing before the wires snapped, sending them to fall into the river.

A second video shared by News24 on Twitter depicted hundreds of people hanging from the collapsed bridge, with others attempting to scale the structure. In the background, one can hear bystanders shouting and screaming while sirens blared.

The Indian Army was dispatched to conduct search and rescue efforts as national disaster management and emergency teams continued their hunt for missing individuals.

CNN reports that Gujarat state minister Brijesh Merja told a local television station that at least 17 people were hospitalized and receiving treatment. According to CNN, Indian Minister of Parliament Mohanbhai Kalyanji Kundariya told NDTV that children were among the victims.

On October 31, Reuters captured an image of Indian Army men transporting dead on a stretcher while rescue crews in boats continued to seek for survivors.

Soldiers carry the body of a victim following the collapse of a suspension bridge in Morbi.

The footbridge was constructed in the 19th century during British colonial control. According to Reuters, it had been closed for half a year for refurbishment and had only lately reopened to the public. According to The Times of India and Gujarat Home Minister Harsh Sanghavi, the state of Gujarat filed a criminal case against the maintenance firm responsible for the bridge.

The day following the collapse of the bridge, Reuters captured this image of dozens of individuals gathered at the bridge’s foot.

People gather as rescuers search for survivors following the collapse of a suspension bridge in Morbi town.

The chief minister of Gujarat, Bhupendrabhai Patel, said on Twitter on October 30 that the state government would compensate each family of the deceased with around 4 lakh, or $500. He stated that each injured person would receive compensation of approximately $600.

On October 30, Indian Prime Minister Narendra Modi wrote on Twitter that he was “very grieved by the tragedy in Morbi.”

“Discussed this with Gujarat Chief Minister Shri @Bhupendrapbjp and other authorities. Relief and rescue operations are in full swing, and the affected are receiving all required help “Modi wrote in Gujarati.