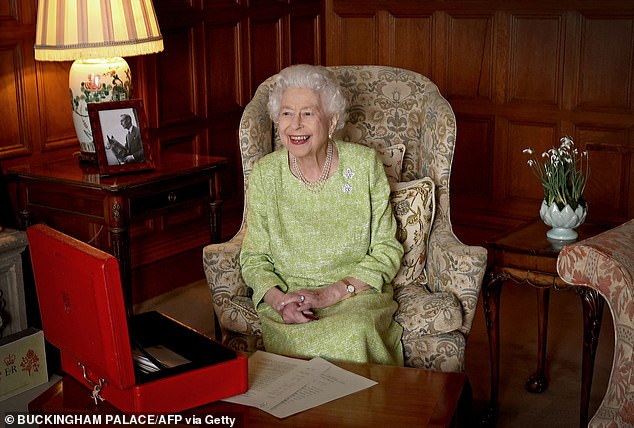 A photographer has stated that the Queen despised having her hands photographed and once refused to pose with a sword for a shot.

In 2002, Rankin, 56, was one of eleven photographers allowed to shoot the monarch at her Golden Jubilee.

His request to photograph the Queen carrying a ceremonial sword was denied after she stated, “I don’t like my hands.”

The Times claims that he was later informed by Buckingham Palace that his photograph of the monarch was one of the Royal Family’s favorites due to her bright smile.

The photograph depicts the Queen wearing pink lipstick before a Union Jack banner.

In an interview taped prior to her death for the podcast Tea with Twiggy, he stated, ‘Of course she came in and a rush of empowerment sweeps over you. I’ve never felt such atmosphere before, and she was so hilarious from the moment she entered the room.

A Buckingham Palace handout photo released on February 6 of this year shows the late Queen smiling while seated at Sandringham House in Norfolk.

She stated, “I don’t like my hands” in response to my request to photograph her wielding the sword. I believed that was the greatest way to avoid holding the sword.

‘I’m probably not meant to say this, but what I admired about her is that she is so intelligent, and every comment she gave had this incredible twist.

“It was simply astoundingly brilliant. I only spent five minutes with her, therefore I do not personally know her.

As she approached the throne room to be photographed, the photographer stated that he spotted the Queen “cracking up” with a footman.

He said, ‘I was in the throne chamber while she and the footman walked down the corridor.

“They were both laughing hysterically, and I thought, ‘That’s exactly what I want.’ So this was on my mind the entire time.

Rankin, 56, was one of eleven photographers invited in 2002 to capture the monarch during her Golden Jubilee.

“I received an incredible email from the curator stating that my portrait of her is one of their favorites, which I believe to mean the Palace’s favorite, because she is truly laughing in it.”

In an interview after the image was completed in 2002, Rankin said that the Queen had made fun of him during their meeting.

He said, “I’m seldom nervous, but when she walked into the room, I became a nervous wreck.”

“She has a wonderful sense of humor, and she pulled the mickey out of me…” My camera’s sync lead fell out, and she began to laugh and smile.

Oh, you certainly have quite a bit of equipment, she remarked.

»Photographer says Queen refused to pose because she ‘hates her hands’«