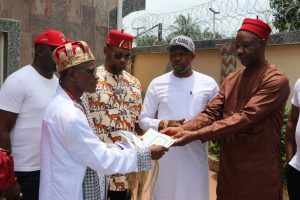 A maritime expert and frontline aspirant for Awka North and South federal constituency in the 2023 general elections under the platform of the All Progressives Grand Alliance, APGA, Chief Azubuike Ekweozor has donated a Sienna bus to the Anambra Broadcasting Service, ABS.

Chief Ekweozor made the donation when the Acting Managing Director of ABS, Mr Gab Okpalaeze and his team paid him a courtesy call at his home in Umuawulu, Awka South Local Government Area.

Correspondence Kenechukwu Chukwudi reports that speaking during the visit, Mr. Okpalaeze who recently inaugurated an ABS Revenue Think Tank Team to scale up the revenue base of the state media through key partnership with stakeholders and media friendly individuals, said that the visit was to appreciate Chief Ekweozor for being a wonderful partner to the ABS over the years and the need for him to continue his support and partnership with the station, especially now that the state needs innovation to achieve results.

Mr. Okpalaeze emphasized that ABS is repositioning itself to be a global media outfit that will be telling the story of Ndi Anambra and by extension Ndigbo as it is, including showcasing the rich cultural heritage and sites in Anambra in order to attract investment to the state through tourism.

While welcoming the ABS crew, Chief Ekweozor  assured that he will always  support the station and explained that his ambition to represent the people of Awka North and South Federal Constituency at the Federal House of Representatives is to ensure that they enjoy dividends of democracy through quality representation and life impacting projects and that the brand-new Sienna bus is to help the station achieve its aims and objectives and promised to do more.

The traditional ruler of Umuawulu, Igwe Joel Egwuonu and the President General of the community, Mr. Charles Chike amongst others, thanked Chief Ekweozor for his gesture, noting that he has proven himself worthy of his personality, which is being at the fore front of impacting lives and humanity at all times.

The Director of Administration of ABS, Lady Tina Ekenta, ABS on Air Personality of repute, Prince Emeka Kalu, Ngozi Obileri of News and Current Affairs and Mr. Casmir Obiegbolu of Programmes Department who were part of the ABS crew, thanked Chief Ekweozor and prayed for him to succeed in his future endeavors.

The car was joyfully received at the ABS Cooperate headquarters Awka by the Staff with chants of joy and dancing.