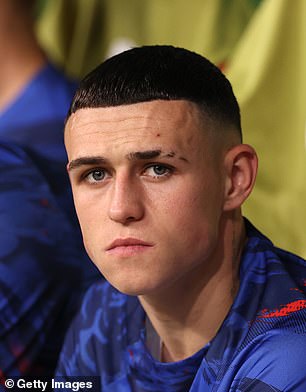 Phil Foden, a standout for England, has a grumpy-looking cat for a twin.

Football enthusiasts have pointed out the striking likeness to the Manchester City star on social media.

The white cat’s distinctive fur pattern and resemblance to Foden’s jawline have generated a sensation on Instagram.

The moggy that plays for “Meownchester City” is now known as Phil Fur-den.

Filmmaker Glenn Kitson, who does impersonations of famous people on social media with purposefully incorrect wording, uploaded the photo of the cat.

He said on Facebook that Phil Foden is a midfielder for Premier League Club Manchester City as well as the England national squad. One of the top young footballers in the world, he is.

Some commenters claim that the black and white cat and the 22-year-old athlete have the same ‘trim’ and gaze.

The cat has been dubbed “Philine Foden” by some users, and “felines on the shirt” by others.

After Foden scored in the 51st minute of England’s 3-0 World Cup victory against Wales on Tuesday, soccer fans began to share the photograph.

After the match against the United States, Southgate came under fire for leaving Foden out of the starting lineup.

However, two goals from Marcus Rashford and a key goal from Foden were enough to defeat Wales, who are now out from the competition. The USA qualified after England in the group.

In the battle to make it into the last eight teams, England will face Senegal on Sunday.