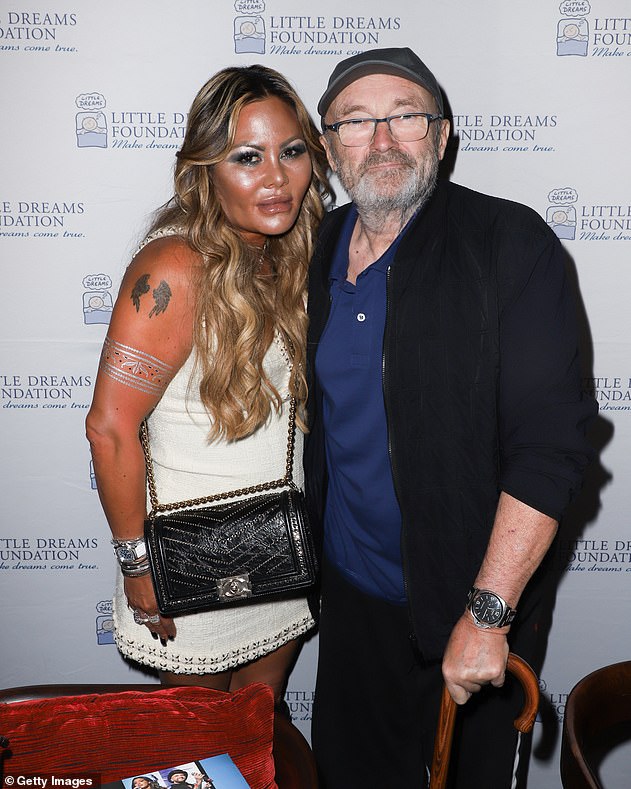 Phil Collins’ ex-wife Orianne Cevey beat her 10 year-old son, let him watch her have sex with her third husband – and threatened to ‘break his face,’ a lawsuit filed by the boy’s dad alleges.

Cevey, 38, is accused of once beating her son so hard he fell to the floor and concussed himself, according to the emergency protection order filed by her ex-boyfriend Charles Mejjati, 51.

She’s accused of getting drunk in front of the youngster, and letting him watch as she had sex with third husband Thomas Bates, Page Six reported.

Cevey – who was married to second husband Phil Collins between 1998 and 2008 – is also accused of dumping her son alone in a Paris hotel room while she hit the town with Bates.

Her son was taken from her Miami home in January, and is now being cared for by Mejjati. Florida’s Child Protective Investigations Unit is continuing its investigation into Cevey.

Mejjati, 51, who made the filing on behalf of the boy, said that conditions at Cevey’s residence were ‘toxic, causing emotional and mental instability’ for the couple’s son.

His ex is once said to have told the boy she’d ‘break his face’ during a phone call that left the boy fearful to return to his mom’s home, the suit alleges.

Cevey has been accused of physically assaulting Collins ‘on several occasions’ – and once threatening to cut off his ‘private parts.’

Those accusations were made previously, and do not form part of Mejjati’s case against Cevey.

Mejjati accuses Cevey of having ‘committed acts of domestic violence against the minor child including, but not limited to, punching the child in the back of the head and causing the child to fall thus giving the child a concussion and hematoma.’

The filings say that while Mejjati was with his son during the week of January 6, Cevey threatened the boy over the phone, saying she would ‘break his face’ when he came back.

On January 10, the boy was ‘afraid to go to the Mother’s home under the threat that she would batter him’ and called his father after an ‘altercation’ with his nanny.

The child’s school has also allegedly called Cevey to discuss his living environment, which led to her calling the boy a ‘liar,’ according to the filing.

When Cevey picked up the son, Mejjati alleges ‘she proceeded to batter the minor child twice,’ once in the car and then slapping him on the face at home.

The child was about to run away, and the Mother grabbed both of his legs so he fell off the couch,’ the documents add.

Their son has also allegedly called Fort Lauderdale police and tried to run away from home.

Fort Lauderdale Police returned the boy home, according to the filing, when Cevey then allegedly took his phone away, causing Mejjati to send authorities to do a wellness check on January 12.

The document states: ‘The Mother [then] got drunk on vodka shots and passed out on the sofa.’

Two days later, Cevey allegedly punched her son with a closed fist on the back of his head after he refused to give Cevey his phone password. The boy fell to the floor and suffered a hematoma and a contusion.

That didn’t stop Cevey, who had to be restrained from kicking the child by his nanny.

In addition to all of the abuse claims, Mejjati claims Cevey and her third husband, Thomas Bates, exposed the 10-year-old to ‘very graphic and explicit sexual behaviors.’

‘The child has observed the Mother having sex on multiple times,’ it adds. The filing also claims the boy has been exposed to guns and drugs and was even left alone in a Paris hotel room while Cevey and Bates went out.

‘The child is showing signs of mental trauma,’ Mejjati’s filing continues. ‘The child’s mental wellbeing needs to be resolved on emergency basis to prevent further mental injury at the hands of the Mother.’

‘Mr. Mejjati’s most important priority, today and always, is the physical and emotional wellbeing of his son,’ his lawyer told the New York Post.

There will be a hearing next month to determine the next measures.

She had reconciled with the In The Air Tonight singer in 2015 following their 2008 divorce, in which she got a then-British record $46million settlement. The couple have two sons, Nicholas, 20, and Matthew, 17.

Collins – who played his last live gig with Genesis last month in a sell-out concert in London – left for a trip to Europe in summer 2020. But he was blindsided when he learned his ex had remarried and installed Bates at his house while he wasn’t there.

Orianne, who met Collins as a 22-year-old when she worked as his translator – had codes to the electronic locks changed and employed pistol-toting ex-military guards, turning the gated home into a fortress for the newlyweds.

And she lavished Bates with more than $75,000 of designer clothes and watches in splurges at exclusive stores in Miami’s Design District, plus a $340,000 Aston Martin supercar.

Meanwhile, Collins stayed at his pad in Switzerland while he launched a successful legal bid to turf them out, eventually selling the house containing his priceless pop memorabilia for $40million.

Orianne is still fighting for half the proceeds.

The newlyweds then moved into a stunning $6million six-bedroom waterfront property with a pool in Fort Lauderdale. And that is where the problems started, it would appear from the court filings.

Bates’s legal team revealed how they first got together in his latest answers to Orianne’s divorce petition.