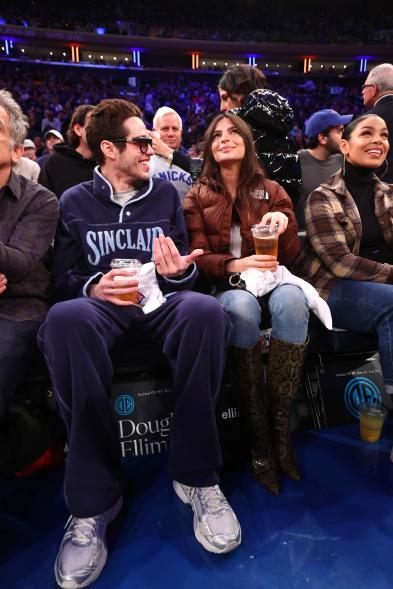 In November, Davidson and the model-turned-author, who divorced Sebastian Bear-McClard in September, were first linked.

In the same month, they were photographed together at a Knicks game.

Davidson, though, has been spotted multiple times with his “Bodies Bodies Bodies” co-star Chase Sui Wonders, while Ratajkowski has been photographed with artist Jack Greer.

Now that we hear it, they have separated. “Their fling has evolved into a friendship,” a source tells us, adding that “both parties are happy with the development.”

Ratajkowski, meantime, has also been enjoying the dating scene.

The author of “My Body” was observed on a date last week passionately kissing Greer.

She was pictured on a date with DJ Orazio Rispo in November. In October, the couple was caught kissing in New York City.

She mentioned last week on her show “High Low” that she has joined a dating app.

“I was like, ‘F–k it,'” the 31-year-old told her audience. “I felt defiant because so many people advised me not to purchase it.”

Ratajkowski was previously married for four years to Sebastian Bear-McClard, with whom she shares a one-year-old son, Sylvester.

Davidson has dated numerous famous ladies, including as Kim Kardashian and Ariana Grande.