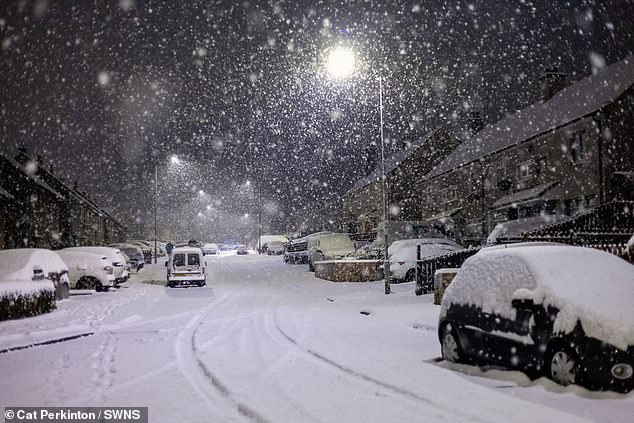 Despite repeated warnings from British officials, groups of individuals have stunned bystanders by playing football and ice skating on frozen lakes.

On the ice of Sefton Lake near Liverpool, approximately ten people were observed, some throwing a ball at one another while two women performed a circle dance.

On the meantime, in Clapham Common, individuals were observed skating through the centre of the ice as they gathered around the lake.

Nick Robinson, 49, who filmed the incident on Sefton Lake, told the Liverpool Echo that he was “astonished” by the group’s willingness to endanger their lives.

“All I could think was that there is no way these folks have not heard the story about the lads in Solihull, and I was stunned. One woman stepped onto the ice, and the rest followed like lemons until there were ten of them on the ice,’ he said.

One of the women in her late 20s to early 30s yelled, “Who do you think you’re talking to? We’re old enough to make our own decisions!” when the group began hurling insults. The wardens reprimanded them, and they ultimately left the ice, but the abuse persisted.’

Overnight, cars in Kilsyth were covered in a heavy layer of snow. This photograph was taken this morning at 7.30 a.m., when snow was still falling.

Workers smashed the ice at the edge of a Cardiff lake on Friday in an effort to reduce the risk of people attempting to play on it.

Mr. Robinson could only watch in dread as the groups inched closer to the thinnest and darkest portion of the ice.

The Liverpool City Council condemned the group for endangering their lives.

A spokeswoman told the publication, ‘The ice on this lake may appear thick, but these adults are even thicker for believing it is safe to walk on. Given the horrible events that occurred at Solihull over the weekend, it is heartbreaking to see people risk their lives in this manner.

The fact that they were told to leave and were disrespectful and rude makes the situation even worse. At all of our parks and lakes, there are signs warning of the hazards, and we beseech you not to approach any frozen body of water.

In Clapham Common, people were observed skating through the centre of the ice on the lake.

The footage prompted community resentment and raised questions about the ice thickness.

It is preferable to contemplate the beauty and wonder of these icy landscapes than to fall prey to their lethal trap.

Local authorities have issued many warnings to parents and the general public regarding the hazards of frozen waters as the United Kingdom continues to endure a severe cold spell.

Friday, the London Fire Brigade issued the following statement: “Our 999 Control Officers have received multiple calls today regarding youngsters and dogs on frozen ponds and lakes.”

It may appear to be robust enough to stand on, but it is frequently not. Falling into ice water poses a high danger of hypothermia, which can be fatal. Stay off the ice and keep your dog on a leash.

On Sunday, four schoolboys, ages six, eight, ten, and eleven, tragically perished after falling through the ice of a frozen lake in Kingshurst, Solihull.

Families traverse snow in Dunfermline, Fife, as the majority of Scotland is issued an Amber weather alert.

In the catastrophe, Jack (left) and Thomas (right) perished horribly.

At the time of the occurrence, temperatures in the area were estimated to be around 1 degree Celsius. Children were playing on the ice when it suddenly melted.

Friday, council employees were busy breaking up the ice at the edge of a Cardiff lake in an effort to reduce the risk of people attempting to play on it.

Monday about 9:25 p.m., the Met Police discovered the body of a man in his twenties from the River Thames near London Bridge.

The individual was seen entering the river earlier in the evening, and the circumstances surrounding his death are not being viewed as suspicious, according to investigators.

The nation’s waterways have begun to freeze as sub-zero temperatures continue for a second week.

On Friday, the Ely River near Cardiff Bay was also frozen.

The Ely River in Cardiff, close to Cardiff Bay, has frozen over due to sub-zero temperatures.

The river is currently covered with a thin coating of ice.

The Met Office expects that some areas will have received up to four inches of snow.

Meteorologists have warned of heavy downpours and even flooding on Monday, making even a break in the frigid temperatures next week of little consolation.

Strathclyde, Central, Tayside and Fife, and West Lothian are under an amber snow warning, and residents have been advised to keep vigilant.

On Monday, Cardiff is projected to reach 15 °C, while London and Edinburgh could reach 14 °C and 11 °C, respectively. Belfast might reach 12C and Manchester 13C.

The snow and ice will be replaced by rain as a result of the warmer weather, which may cause flooding in some areas of Britain.

On Tuesday, December 13, three mourners are pictured paying their condolences with bouquets of flowers following the tragedy in Solihull.