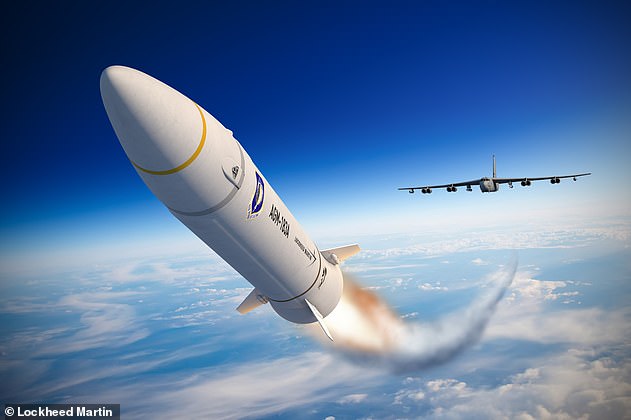 After a “anomaly” occurred during the initial test of the entire system, the Pentagon has acknowledged that its most recent test of a hypersonic weapon failed.

The test was scheduled to launch a Common Hypersonic Glide Body on top of a two-stage missile booster at the Pacific Missile Range Facility in Hawaii.

The system was intended to be launched by the rocket, which would accelerate it to hypersonic speeds greater than Mach 5.

After that, the gliding body would separate and use speed to arrive to its destination.

It was the first usage of the entire system, known as an All Up Round test.

Insisting that the test was not a complete failure, the Defense Department claims that a “anomaly” prevented the entire test from being completed.

According to Bloomberg, no specifics on the ‘anomaly’ or when the malfunction occurred were provided.

Although the Department was unable to obtain data on the whole planned flight profile, the information from this incident will provide crucial insights, according to a statement from Pentagon spokesperson Lt. Cdr. Tim Gorman.

Delivering hypersonic weapons continues to be a high priority, and Gorman stated that the Department is optimistic it is on track to field offensive and defensive hypersonic capabilities by the target dates, which will start in the early 2020s.

The failure is just another blow for the US military as it competes with China and Russia to develop and deploy hypersonic weapons, while US programs appear to be stalling.

Even North Korea seems to be making progress in creating systems that allow aircraft to elude detection by traveling at speeds greater than five times the speed of sound.

The booster rocket malfunctioned during a prior test of the Navy and Army-joined Common Hypersonic Glide Body in May, ending the test early.

Additionally, a booster malfunctioned during the missile’s initial flight test in October, preventing it from taking off.

The Pentagon was unable to test the Common Hypersonic Glide Body without the booster rocket.

While Russia has been the first country to utilize hypersonic weapons in war by launching Iskander and Kinzhal missiles in the Ukraine conflict, China successfully tested a hypersonic weapon last year that orbited the planet before striking its target.

The Air Force successfully fired the Air-launched Rapid Response Weapon in other tests this year (ARRW).

During its development, that program had also experienced difficulties and delays.

The Pentagon conducted a successful test of the Hypersonic Air-breathing Weapon Concept (HAWC) in March.

In an effort to avoid raising relations with Russia while President Biden was traveling to Europe, the test was kept secret for a few weeks.

With the recent release of the new Top Gun movie, whose jet was manufactured by renowned US aviation manufacturers and may depict a top-secret stealth jet, hypersonic weaponry and aircraft have gained attention.

According to TheDrive.com, James Taiclet, CEO of Lockheed Martin Corporation, acknowledged that the company’s top-secret development unit Skunk Works collaborated with the makers of the next Top Gun: Maverick film starring Tom Cruise.

The makers contributed to the design of the fictitious Darkstar hypersonic plane, which appears to have been inspired by images of the eagerly awaited SR-72 hypersonic jet.

Taiclet mentioned “important work in hypersonic flight” in a LinkedIn post in which he claimed that members of the Skunk Works team “partnered with Top Gun’s producers to bring cutting-edge, future-forward technology to the big screen.”

Furthermore, Lockheed Martin executive John Neilson stated in a tweet from April that the Darkstar aircraft might offer a “sneaky peek at what might be the Lockheed Martin SR-72.”

According to the corporate website, the SR-72 is currently being developed by Lockheed Martin in California and might be operational as early as 2030.

It is the SR-71’s replacement, which set speed records in 1976 when it flew from New York to London in under two hours.

The first US spy plane, the swift Blackbird, and subsequently the stealth jet were all produced by Skunk Works, which is renowned for its stealthy expertise.

According to Brad Leland, program manager for Lockheed Martin’s hypersonic program, the aircraft can “attack at practically any place across a continent in less than an hour.”

The next aviation development to combat new dangers over the coming decades will be speed. Similar to how stealth is altering the battlespace now, the technology would transform the game in theater, according to Leland.

The jet’s size is anticipated to be similar to that of an F-22, and it will be powered by a full-scale combined cycle engine.

According to prior statements made by Lockheed Martin, the SR-72 was intended to be an autonomous aircraft that could travel at speeds of up to Mach 6, or six times the speed of sound.

The aircraft would be moving so quickly at this speed that an enemy would not have time to hide or respond.

Flying at speeds of up to Mach 5, or 3,800 mph, hypersonic jets might significantly reduce travel times for passengers.

For instance, a commercial flight from New York to Shanghai currently takes around 15 hours, but could do so in two at hypersonic speeds.