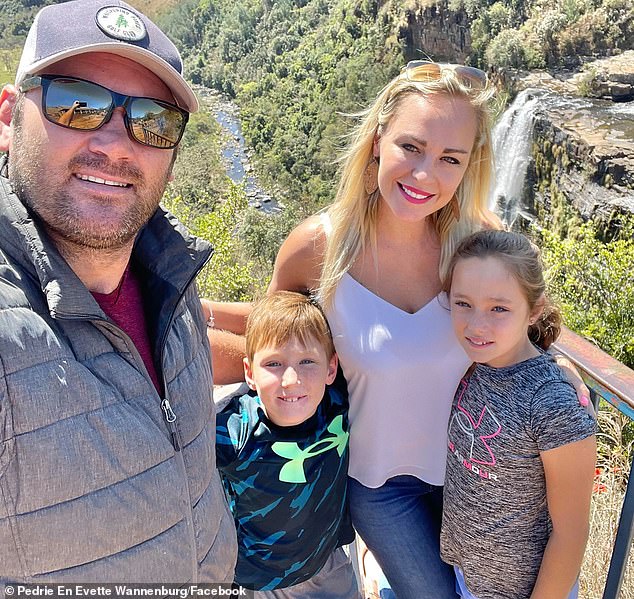 Pedrie Lannenburg, a rugby legend in Europe and his homeland South Africa, was killed in a brutal car wreck after a teen fleeing the police ,smashed into his car in Texas.

Lannenburg, 41, was traveling through Houston with his wife, Evette, their ten-year-old daughter and son Francois, 8, on Friday at 6pm when they were hit by the other car traveling 100mph at a three-car intersection.

Francois was air lifted to a local hospital where he remains in critical condition. His injuries have been described as ‘life-threatening.’

The 16-year-old, who was in a police chase when he crashed, has been arrested for felony murder charges.

According to Harris County Sheriff Ed Gonzalez, a sheriff’s unit attempted to stop three young men in a car at the intersection of Greenhouse and Little York Roads.

Gonzalez said that the driver fled the unit and sped away at 100 miles per hour eventually rear ending one car, crossing the median of the road and hitting two other vehicles.

Wannenburg’s car was the first one hit after the fleeing vehicle crossed the median.

Two other people in the second car that was hit were sent to a local hospital with injuries.

The investigation is continuing as to why the sheriff’s deputies first stopped the juvenile’s car.

NBC Houston named the suspect as Ali Alabadi. He along with the two other juveniles he was with were transferred to local hospitals with non-life threatening injuries.

The Harris County Sheriff’s Office confirmed to the Daily Mail that Alabadi will not be charged as an adult.

annenburg was a native of the South African city of Mbombela, formerly Nelspruit.

At the time of his death, he lived with his family in the Houston area, according to his social media profiles. They moved to the city in 2019.

Wanneburg’s wife is a model and works as a sales rep for a skincare company, according to her LinkedIn page.

His most successful period on the field came between 2007 and 2010 when he played as a flanker for the Blue Bulls in the South African capital of Pretoria.

During that period, Wannenburg became the first flanker to play 100 games for the Bulls as well as winning three Super Rugby national championships.

It was around that time that Wannenburg admitted to having problems with alcohol, cocaine and ecstasy, reported ESPN in 2010.

He said, ‘The cocaine and ecstasy goes hand in hand with the drinking. If you drink too much and the drugs are there, then you give in to temptation.’

Shortly after those revelations, Wannenburg moved to Europe to continue his professional career.

Wannenburg went on to play for Castres in France and Ulster in Ireland during his professional career. The former Springboks star got married and had his first child while he was playing in Ireland.

In 2016, Wannenburg moved to the USA to play for Denver and was previously the coach of the Austin Elite Rugby team in the North American Major Rugby League.

He described his move to the U.S. as being in part for his ‘family’s benefit’ in an interview with Planet Rugby.

After two years playing in the USA, Wannenburg announced his retirement saying, ‘It is sad for me to call it a day on my playing career. The life that rugby has given me has been just amazing. I am definitely not done with rugby. I’ve always said one thing I will never do is coaching. Lesson – never say never. Now I am doing exactly that and loving every minute of it. New challenges ahead. Building, learning and growing everyday.’

Following the news of his tragic passing, one of Wannenburg’s former teammates, Stephen Ferris said that the former flanker was a ‘legend of the game and one of the nicest guys you could ever meet.’

In September 2020, South Africa Rugby Magazine named Wannenburg as one of the most underrated national team players of all time.